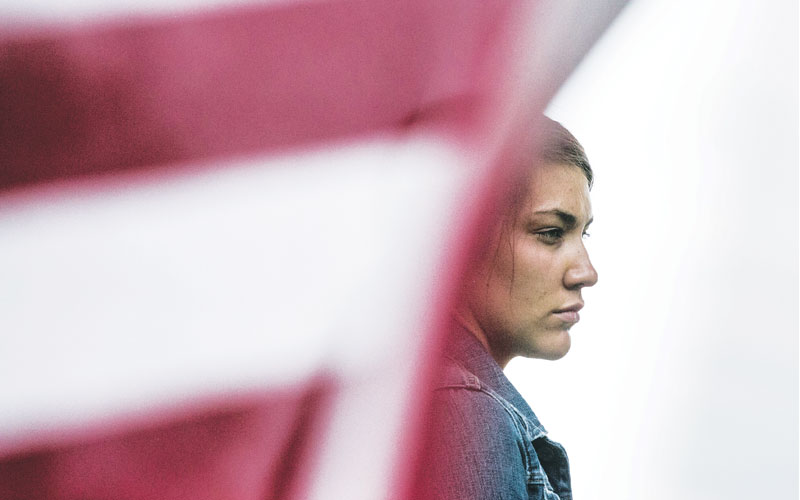 Vanessa,* the wife of an Army soldier, is an unrecognized hero. She doesn’t wear a uniform or medals. She isn’t greeted with words of thanks while out in the community. Like so many military spouses, she maintains order on the home front through her strong belief in the values her husband defends. She bears sacrifices and unimaginable stress, often alone and anonymously.

It’s for thousands of patriotic citizens like Vanessa that American Bible Society— in partnership with Support for Military Spouses—participated in Operation Shoebox in March at Fort Bragg in North Carolina.

Crowds gathered to receive their personal “shoebox,” a care package that included New Testaments, as well as items to pamper and encourage women while their spouses remain on active duty.

At the event, Brigadier General James Scanlon acknowledged the work of people who serve our country by waiting for their spouses to return. They often are the unsung heroes, the behind-the-scenes people who keep the family together.

“When members of the military are in the community in our uniforms, we get handshakes and receive thanks every day,” said General Scanlon. “But we also need to look our military spouses in the eye and thank them for their service.”

Applause erupted when General Scanlon praised a key item in the shoebox.

“One of the most important things in the box—the New Testament—is the key to joy and help through struggles.”

“There is no light without the Bible,” says the mother of a one-year-old son. “As a military family, there is so much to deal with on a daily basis. We would have no hope without the Bible. My husband has been on six deployments—Iraq, Afghanistan and who knows where because he serves with a Special Forces unit, and his location is often a secret.”

She needs the hope of God’s Word to remain calm in light of such uncertainty.

Mary,* a grandmother of three, speaks about the toll military life takes on families. She moved from South Africa to help her daughter raise her three grandchildren, ages 2 through 10, while her son-in-law is away.

“Faith is the main source of support,” says Mary. “We must pray for these marriages because so many of them don’t survive in the military environment. But if God is center in the household, marriages will survive.”

Allison says her faith in God supported her through the challenging life of a military spouse. Her husband has been deployed twice from Alaska to Afghanistan and now works long hours at Fort Bragg.

“It’s a hard journey,” says the mother of four children, ages 7 months to 12 years. “My faith has increased with my husband being in the military. But sometimes during his deployment, I’d get mad at God. Then God would answer and send people I wasn’t expecting to help me or to say encouraging things.”

Pam,* a veteran Army wife, agrees that her faith was essential in managing the challenges of distance, separation and uncertainty.

“My faith sustained me through many rough, rough times in [my husband’s] 30-year Army career. He was gone, in Vietnam, for 12 of those years. … One time, I had this incredible inkling to pray and pray hard while he was deployed to Vietnam. I remember the exact day and the exact time.

“When he got back,” Pam continues, “I [learned that] he was over mountain terrain, and his helicopter had dipped down to drop supplies to troops. The helicopter navigator panicked and [my husband] had to fly the helicopter. … God helped him to quickly get in and get out.”

“The challenges facing military families are manifold,” says Pace, executive director of American Bible Society’s Armed Services Ministry. “They are located away from their extended family and need to seek support from a new community. They face being uprooted on a routine basis, sometimes unexpectedly.

“If the spouse wants a career,” continues Pace, “it is a challenge because potential employers perceive that they will not be able to stay with the company long term. Changing schools is a regular concern. And, of course, there is the loneliness when the spouse is deployed.”

Given the circumstances military wives face, American Bible Society is planning eight, 30-day devotionals focusing on their unique challenges. The devotional is being created in partnership with Brenda Pace, a well-known author and speaker, who encourages and mentors women to develop their full potential for serving Christ, with a particular focus on military spouses.

To further meet the spiritual needs of women, American Bible Society offers the Women’s E100 via the website: www.E100women.com. Women can register to participate in the Essential 100 Challenge, which explores 50 Old Testament and 50 New Testament passages. They can engage in Scripture individually, side by side with a loved one or in small groups.

Like spouses, children in military families need support. Through its partnership with Military Community Youth Ministries, American Bible Society provides an interactive web experience (www.RezLife.com) for military teens. By combining God’s Word with language and stories specifically from within the military culture, the website explores a variety of issues: anger, friendship, losing a parent, isolation, purpose, identity, belonging and family.

For nearly 200 years, American Bible Society has been providing Bibles to military service men and women. But we’ve learned that the whole family needs support.

The common denominator in all these programs is God’s Word. There’s no surer foundation than that.

* Names of military spouses have been changed.

You can help share God’s Word with troops and veterans today! Visit ABSRecord.com/military.

Voices from the Military