RecordArts And Media & In The USA & United States & USA 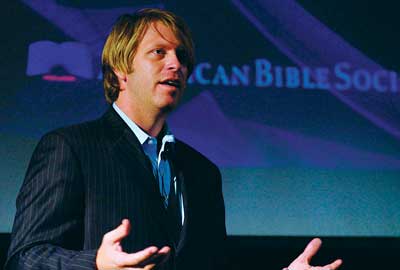 Gabe Lyons is a man on a mission to recapture the redeeming influence Christianity has in shaping culture. As coauthor of a challenging new book, he rattles off national studies he commissioned that show Christians are too often known for what they oppose rather than as the bearers of good news.

Working with partners that include the American Bible Society, Gabe Lyons and his collective of innovators, artists, and church and societal leaders are using a web magazine, called Fermi Project, to explore ways to highlight how the God of the Bible is behind all the good and beautiful in culture. Gabe wants to give the Bible’s life-changing message a fresh hearing among today’s searching generation.

Q: In your writing, you reference the idea that Christianity’s early growth can be credited to a deep involvement in the fabric of culture. What changed?

A: At the beginning of the last century, following the Scope’s trial, many Christians retreated from the centers of culture and lost influence in shaping it. But, the Great Commission is still our calling. We want the church to become the moral center again, and to do that churches need to become communities of renewal that inspire their vocational leaders to lead.

Q: Why has Christianity lost its lead role in shaping culture?

A: We’ve allowed some of the good news of the gospel — God’s creation and God’s redemption of that creation — to be edited out.

Q: How is Fermi Project a response?

A: Journalist Andy Crouch has said that you don’t change culture by criticizing it. You change culture by creating it. By thoughtfully and winsomely engaging culture with the gospel’s good news we want to constructively shape culture, and at the highest levels. The local church is responsible for “making the invisible kingdom visible.” The biblical message of God’s redemption and restoration will regain the wide cultural influence it used to have if we can emphasize its beauty and attractiveness.

Q: Where did the idea for Fermi Project come from?

A: When I read Charles Colson and Nancy Pearcey’s book, How Now Shall We Live?— they don’t just talk about sin and redeeming souls — they also talk about renewing culture.

Q: Others have set out to redeem culture; how is Fermi Project different?

A: The Fermi Project brings all of these people together in one conversation. Through our Q gatherings (annual conferences of Christian leaders interested in asking questions that stimulate connections and collaborations) and our online digital magazine, we bring together Christians who are leaders in seven channels of cultural influence: business, government, media, church, arts & entertainment, education and the social sector.

Get the Most Out of Your Daily Bible Reading

Pray for Las Vegas After Deadliest Shooting in U.S. History