A Story of Christian Unity 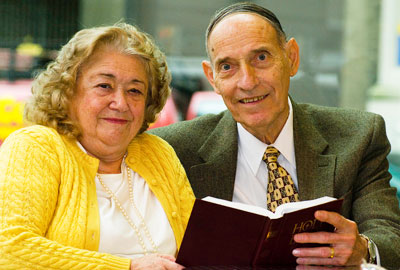 According to her younger brother, Sister Mary Charlotte Frenzel was an unlikely candidate to become a Dominican Nun, especially considering that her order took vows of poverty and silence.

“Mary was so outgoing and community oriented,” says her brother George. “Before joining the convent, Mary volunteered for Head Start (a government program to help kids succeed in school), enjoyed attending operas and plays and was very sociable. She had many friends; I was really surprised when she chose to live in a cloister.”

Christian commitment has held a central place in the Frenzel household. Maintaining differing expressions of faith, however, can be a delicate business. Even though their father Carl Frenzel was a devout German Lutheran, he agreed to allow his new bride to raise their three children in her Irish-Catholic tradition.

The religious harmony that reigned in the Frenzel household met a new test when George met Dolores; Dolores came from a Baptist tradition. During their courtship Dolores’s father biblically introduced George to a Protestant understanding of faith, so that when Dolores and George wed they broadened the Frenzel family’s Christian-faith tradition yet again.

The new couple worked to maintain close family ties. When George’s sister Mary Charlotte entered the Blue Chapel Monastery in 1987, George telephoned her often, and when she took her vows he honored her with an American Bible Society (ABS) Bible.

Shadows of the Almighty

This is a pattern George and Dolores have followed for some 50 years of marriage; they use almost any occasion - birthdays, graduations - as an opportunity to give Bible Society Scriptures to friends and family; whenever there is a death of a friend or family member, they make a memorial donation to the Bible Society to help supply Bibles to people around the world in many languages. Dolores says, “It is our way of keeping people we love under the shadow of the Almighty.”

In 2007, Sister Mary Charlotte was diagnosed with cancer. She spent her last two months living at St. Rose’s Dominican Home, a hospice in Manhattan where, during her final week, George visited her daily. He says that as you enter the facility, you see a reproduction of Warner Sallman’s classic painting, Christ at Heart’s Door. “It so beautifully illustrates my sister’s favorite verse,” says George.

Because of her order’s vow of poverty, when Mary Charlotte passed away on July 4, 2008, her Dominican sisters requested that no flowers be sent. Still George and Dolores wanted to find a right way to memorialize Mary’s life of prayer and service - one that both respected and honored the diversity of religious tradition represented by family members and others who loved and knew her. They wanted to honor her in a way that the whole family could participate - both Catholics and Protestants. What common cause could unite them? They queried friends as well as the sisters at Blue Chapel convent about donating ABS Bibles in her name. ABS has been providing Bibles for all Christian traditions since 1816.

“The response was overwhelmingly positive,” says George. “Everyone from the Catholic Bishop of Newark to Baptist pastors affirmed the idea.”

Dolores set to work researching family contacts, eventually sending out more than 200 letters, each with a card illustrated with Sallman’s painting, inviting participation in Mary Charlotte’s memorial. “I started with our Christmas card list,” says Dolores, “and it grew from there, going back two and three generations, including second and third cousins.”

The response has been honoring indeed. Over 150 families have participated in the memorial, raising more than $6,000. The contributions include gifts from the Catholic Bishops of Brooklyn and Newark, the Senior Pastor of Calvary Baptist Church, eight Jewish families, nearly everyone in the Frenzel’s Brooklyn block association, and Mary’s oncologist, surgeon and medical doctor. Each contributor received a Gospel of John or, for Jewish contributors, a book of Psalms from the Bible Society.

“It’s really pulled our family together,” says Dolores. “It was an answer to the Lord’s last priestly prayer on earth, ‘That they may be one as Thou, Father, and I are one - that the world may believe that Thou has sent Me.”

President Barack H. Obama was the keynote speaker at NHPB in May. Uncover the Word&...