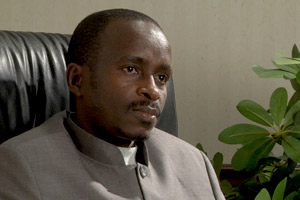 Simon Peter Mukhama is a charismatic, serious leader. His black eyes blaze with intensity. His voice sounds with confidence, and his face registers a keen, sharp intelligence.

He is on a fearless mission to deliver God's Word to his people and fight against violence and destruction across his country.

It's fitting that Mukhama is General Secretary of the Bible Society of Uganda; his love affair with God's Word began when he was just a young man in high school. A “close encounter” with Scripture made him hungry for God's nourishing Word that day and every day since.

“I need Scripture on a daily basis,” he says. “I can't read it once and think I'm covered. Scripture speaks to me through all the different aspects of life. It is a daily companion.”

Indeed, God's Word has been a lamp to Mukhama's feet and a light to his path. That's why he wants to share it with the people of Uganda. As head of the Bible Society for the past two years, Mukhama is committed to the traditional roles of translating, publishing and distributing Bibles in his native Uganda. But Scripture engagement might top his agenda.

To that end, he plans to take three-pronged approach, the first of which is boosting literacy rates by using Scripture as the basis for learning. Many people in Uganda can't read or write. So if Mukhama followed the traditional role of merely translating Scripture, he says, “We could struggle for years translating, but if people can't read, then the Scriptures fail to have meaning,” he says. Therefore, he wants to partner with government centers and use Bible-based primers so people can learn to read God's Word and ultimately experience the fruits of daily communion with it.

For those who will never learn to read, Mukhama wants to reach them through hearing—the second of his three approaches. He strongly supports the work of Faith Comes By Hearing®. This American Bible Society partner is committed to reaching the nations with God's Word in audio, offering the Bible in a format that will connect with the world’s 50 percent illiterate population.

Trauma healing is the third way Mukhama wants Ugandans to engage with Scripture. Uganda — known as the Pearl of Africa—has seen its share of conflict over the years, particularly between the Lord's Resistance Army (LRA) and the Ugandan Army. The LRA has committed numerous atrocities against the citizens of Uganda. Consequently, many are wounded, broken and traumatized.

“We need to heal our people,” Mukhama says, and the place to start is God's Word. “The Scriptures can help with trauma healing because we draw from them a lot of love and care. When you're told through the Scriptures that there is somebody who lives in me and he who lives in me is greater than the world, you really get confidence.

The Bible Society's firm foundation in Scripture has brought healing to a country struggling with HIV/AIDS. The Bible Society of Uganda, in collaboration with the Swedish Bible Society, implemented the Good Samaritan program in 2004. This HIV/AIDS outreach program trained leaders to provide for the basic medical, emotional and spiritual needs of people with HIV/AIDS and their families.

The Bible Society is also implementing the Take Charge program for young people who are affected or infected with HIV/AIDS.

In talking about HIV/AIDS, Mukhama emphasizes the importance of focusing on the future, not the past. “When we come to Christ, we are not condemned, but forgiven. We're set free.”

Mukhama asks for prayers as he implements his plans for the Bible Society. “Sometimes, our work is overwhelming. But when you hear friends saying that they want to pray with you and for you, you get encouragement.

Equipping a new generation with the tools to build a better future.