The Bible Breaking Records in Zambia 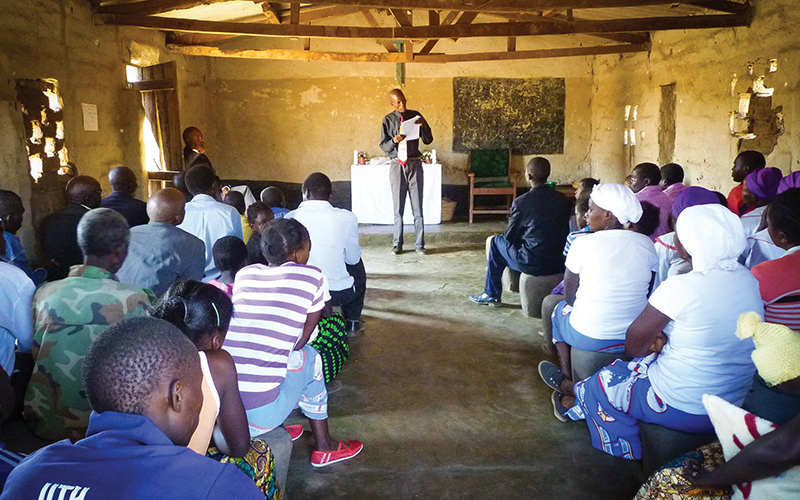 Death is no rare thing in Zambia. Pastor Cyrus Miti has performed countless funerals in his day. But this? This was a first.

During a funeral service in his village, Pastor Miti was reading aloud from John 11, in which Jesus raises Lazarus from the dead, when he distinctly heard a giggle. His eyes darted around the church. Smiles were creeping onto the somber faces of funeralgoers. He heard whispers, chuckles and then outright laughter. Bewildered, Pastor Miti had to ask: What could possibly be so funny at a time like this?

A representative from the congregation stood up and explained. This was the first time their church had heard John 11 read in their native tongue of Nsenga. Hearing the story filtered through foreign dialects for so many years, they had entirely missed the point; they assumed the story was all about the grieving family of a dead Lazarus.

“But now we understand that it is about Jesus—his power to raise the dead!” the man exclaimed. The congregation’s unexpected laughter had been unbridled joy; the end of the story was better than they had ever imagined.

Revelations like this will become increasingly commonplace for one million people who speak Nsenga or Ila as their heart language, thanks to two Bible translation projects in partnership with the Every Tribe Every Nation alliance. And it’s not just the results of these projects that are shattering expectations; the translation process itself has been a record-breaking achievement.

“Now we understand that it is about Jesus—his power to raise the dead!”

Within the last decade, New Testament translations took an average of eight years to complete. But when the Nsenga and Ila translations launch in July of 2016, both projects will clock in at a blazing three-and-a-half years, including the time it takes to plan a launch celebration.

So what exactly makes these accelerated projects in Zambia the standard of efficient Bible translation work?

“It does not mean that we cut any corners,” explains Nick Garbidakis, CIO / CTO of American Bible Society. “What it means is that we accelerate by eliminating ‘decelerants.’” Through funding from American Bible Society’s financial partners, subtle obstacles or “decelerants” to efficient translation work have now been eliminated at every phase of the process.

The most obvious of these phases is the daily translation work itself. For rapid Bible translation to occur, state-of-the-art technology is a must. Without the financial support of Every Tribe Every Nation, Zambian translators would never be able to afford the multiple laptops, land routers, printers and advanced computer programs that they employ on a daily basis.

But the most revolutionary ingredient for rapid translation has been an total overhaul of the way translators receive feedback on their drafts from indigenous faith groups. In the past, translators would drive hundreds of miles on dirt roads, hand delivering New Testament drafts to local Christian leaders for their input.

And then they waited. If and when feedback arrived back from the faith leaders, their opinions were so contradictory that translators hardly knew which ideas to send to print—a frustrating end to a lengthy process.

Now translators host Christian leaders at a retreat center for a weeklong review workshop. There, the local representatives partake in roundtable negotiations over the biblical text, coming to group decisions on the final translation. “Everybody leaves that workshop saying, ‘I have been heard and I am comfortable with the decision that has been made,’” says Chris Pluger, project coordinator of the Nsenga Bible Translation Project.

While these workshops happen on the back end of a translation project, improvements have also been made on the front end—the daily commute. Nsenga translators used to trek four kilometers on foot from their Eastern Province village of Petauke to an office outside of town. In a multi-year race against the clock, those precious hours stack up.

In response, Every Tribe Every Nation accelerated Bible translation by accelerating the translators, outfitting each team member with a bicycle. Now the team zipped along the paved road between home and office, increasing dedicated translation work each day.

Eventually, the translation office was simply moved from the outskirts of town into the heart of Petauke. The new location provides both efficiency and publicity. Now local pastors like Cyrus Miti can swing by the office every week, picking up the most recent drafts of New Testament books.

In fact, Pastor Miti had only just picked up his copy of John’s Gospel when he preached his unforgettable funeral sermon on Jesus and Lazarus. Translators say Pastor Miti is unique in his zealous demands for up-to-date drafts every week, but they don’t mind.

After all, he’s just embodying the God-given desire behind accelerated Bible translation work—to spread the life-changing message of God’s Word as fast as possible.

You can support accelerated Bible translation around the world!
Visit ABSRecord.com/Translation.

“People who work in the market want the Bible, but they cannot afford it.”

Providing God’s Word where it is needed most in Uganda