The Seed Falls on Good Soil

100 years of good news in Korea 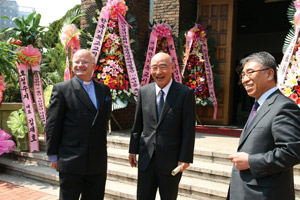 A war, a language barrier and an unbelieving heart: humans see all these as obstacles. But to God, they are vehicles of his message, transforming an unreached Korea into one of Asia's most Christian nations. This year, the Korean Bible Society (KBS) celebrates the 100th anniversary of its Korean Bible translation, revealing the panorama of God's work thus far — and the necessity of the task still at hand.

Twenty-five years later, in 1911, the first full Korean copy of the Bible was published. But when the Korean War began in 1950, printing Bibles in Korea became impossible. ABS answered the call, printing Bibles in Japan and shipping them to Korea as military supplies through U.S. army chaplains.

The journey from then to now has been marked with the outpouring of God's power. The church in Korea has exploded, and the now-of-age Korean Bible is proof.

Today, KBS's three Bible Houses are strategically located in the beating heart that is Seoul, South Korea. Once propped up by other Bible Societies, they are now funding Bible ministry across the globe. But as ABS Executive Vice President Simon Barnes remarks, KBS's maturity is proven not by its size or strength, but its devotion to a God-given mission.

“We hold at the center of all that we stand for not a static piece of literature, but rather a living, God-breathed Word. And, this is the key to a life rooted in a knowledge of Jesus Christ as Lord and Savior,” says Barnes.

Speaking to those serving and leading ministry in Korea, Barnes compares KBS's work to the passage in Acts 8 where God sends the apostle Philip to witness to the Ethiopian eunuch, opening the door for God to reach a new culture. KBS is on the front lines of a similar task, working inside a country that is roughly 74 percent non-Christian.

“Our work is far from over. There are many corners of this country, indeed the world, that still are desperate to receive God's living Word and the Good News of Jesus.”

“I Never Knew About the Bible”

The hope of Scripture is brought to traumatized people in Sri Lanka.

The Book of Luke in Patois Released in the UK

The prospect of the Bible's appearance in Patois has outraged some traditionalists in...

Bringing the Bible to the Deaf in Vietnam.