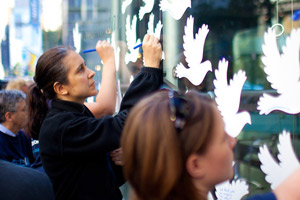 On September 9th, 2011 the people of New York gathered around Bible House at 1865 Broadway to pay tribute to the 10th anniversary of 9/11 and were encouraged to post a prayer on the glass and receive the God is Our Shelter and Strength Scripture Portion.

The following ran in the Washington Times on Friday September 9, 2011:

On Sept. 11, 2001, many Americans felt as though the world ended. Sadly, for nearly 3,000 people, it did. Two symbols of American strength — the twin towers of the World Trade Center and the Pentagon — were either decimated or badly damaged.

When the seemingly unshakable shakes— and falls — those left behind find themselves asking, “What can I hold onto?”

In the days following the Sept. 11 terror attacks, countless Americans and American organizations also asked, “What can we do to help?” As an organization that has spent nearly two centuries working to make the Bible available across the nation and around the world, the American Bible Society had a pretty obvious answer to that question: Share the comfort and strength of God's Word. As we answered this question, thousands found an answer to the question, “What can I hold onto?” When we can't hold onto anything else, we can hold onto God. Thousands more also found the sustaining truth that, when we can't even reach out for God, God will hold onto us.

As a nation, we share a common wound from the events of Sept. 11. None of us who lived through that day will ever be the same. All of us can answer the question,“Where were you on Sept. 11” in exacting detail. This shared trauma has in many ways defined us as a post-Sept. 11 nation.

I know that people deal with trauma in different ways. The American Bible Society recently conducted a poll that highlighted this reality. Whether it was relying on friends, family, faith or professional counseling, 94 percent of those surveyed who had dealt with trauma turned to something or someone to help them cope. Sadly, 6 percent said they had nowhere to turn.

Looking back at the days and weeks following the terror attacks, we can be proud of the way the majority of Americans dealt with this tragedy. We reached out, we came together, we prayed for loved ones lost and we grieved both for those we didn't know and those we did.

In that recent poll, we asked Americans to select the source of the following words: We often suffer, but we are never crushed. Even when we don't know what to do, we never give up.” And while the majority of respondents attributed the quote to everyone from President Bush to Captain America, the words actually come out of 2 Corinthians 4:8. Reading them again, it strikes me that they could have been written for a post-Sept. 11 America.

Recently, American Bible Society employees took to the streets to hand out Scripture Portions entitled God is Our Shelter and Strength, to those gathering in the streets of Manhattan to commemorate the 10th anniversary of the 9/11 attacks. On that fateful morning in 2001, ABS employees did the same thing; provided Scripture to the shaken citizens and survivors at ground zero. On this the 10th anniversary, American Bible Society and the Salvation Army also announced the launch of The Freedom Bible, a new, thematic version of the Bible, highlighting more than 3,500 verses that speak to the astonishing message of freedom found in God's Word.

Giving From The Heart