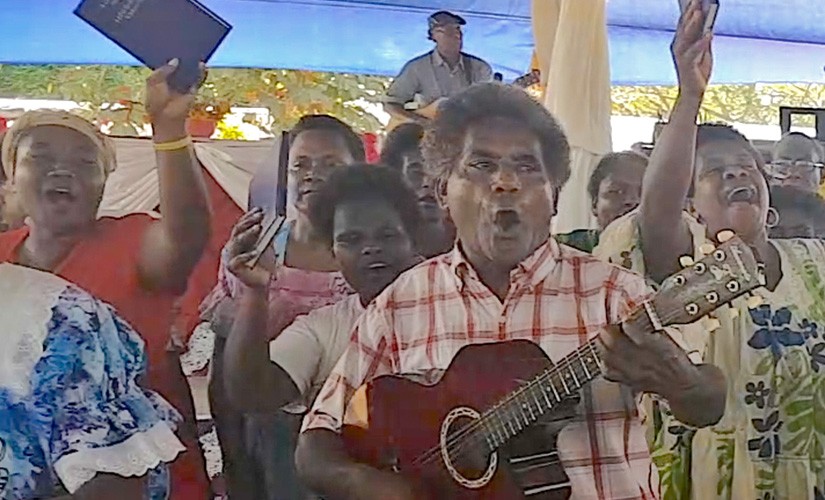 Life has been difficult and the future uncertain for those living in the shadow of the volcano Manaro Voui on the South Pacific island of Ambae.

Manaro Voui spewed ash and sulfur a few years back, and thousands had to flee from their homes to neighboring islands. The consignment of 1,000 New Testaments had just arrived for a Bible launch when the islanders were urgently evacuated.

The following year, just as the inhabitants of the small island were beginning to rebuild, it erupted again! But these natural disasters could not keep the 8,700 people who speak Havakinau from the encouraging, joy-filled Word of God, thanks to the support of friends like you.

The islanders finally gathered to celebrate the launch of the Havakinau New Testament on a nearby island. To mark the occasion, 200 women marched around the church grounds singing and dancing with the New Testament in their hands. Then worship, prayers, and speeches were made before the New Testament was officially handed over to the people of Ambae.

Many of those attending were in tears from the joy of receiving God’s Word in their own heart language. “I am very happy about the Havakinau New Testament,” says 70-year-old translator Kathleen Lingi. “My people can understand God’s Word better in their own language. As they read, they believe in God as the basis of their faith. This is the good change that I can see coming.”

Ledua, a Bible Society leader who attended the launch, says, “I observed the people’s faith in Jesus to rebuild their lives spiritually. They had been evicted from the island for safety and left behind their livelihoods. But there was something else that was there that kept them strong. At the launch they danced and sang and preached and cried. It was amazing.”

We are so grateful to our American Bible Society financial partners for giving these people the strong foundation of Scripture in their own heart language to begin rebuilding their lives.