War and Peace in Armenia

When war and sickness ravaged Armenia, you cared for wounded hearts with the healing balm of the Bible. 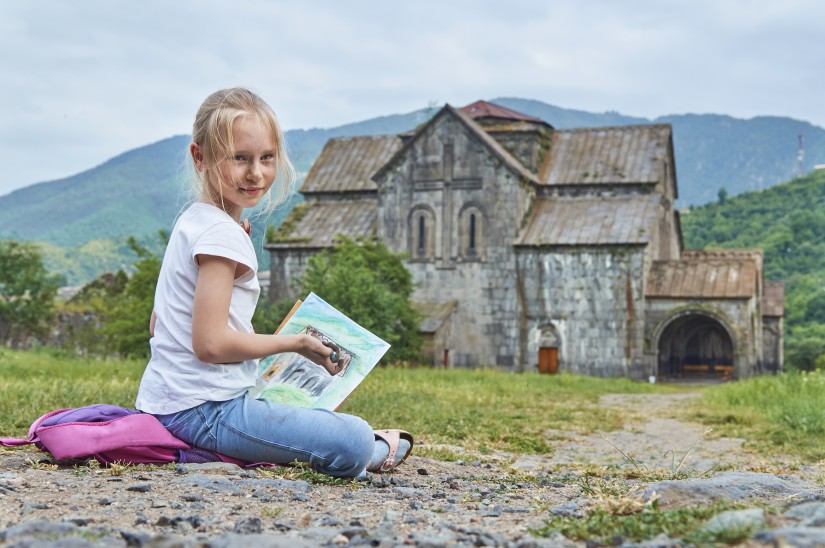 First came the pandemic. Then came the war.

For the people of Armenia, the battle against COVID-19 was crippling. The outbreak of war with Azerbaijan was like pouring gasoline on a fire.

“The church was not ready to serve during the pandemic,” says Bible Society of Armenia’s Marianna Apresyan. “Then something worse happened, something we haven’t seen in our worst dreams. The war broke out.”

At the end of 2020, a 44-day conflict over a long-disputed territory killed 5,000 Armenians, wounded 10,000, and displaced more than 100,000. Mothers buried their sons. Children lost their parents or lived in constant terror of such a loss. Tens of thousands of families fled their homes, seeking refuge in communities throughout Armenia.

In dark times like these, it’s only natural for suffering people to wrestle, weep, and wail through the most difficult questions known to man—just as Jesus did on the cross:

Where are you, God? Why have you allowed this to happen? Do you still love us? Have you abandoned us?

Yet amid these heartbroken yearnings, one Armenian church leader named Arsen Zohrapyan provides a gentle reminder: “The Bible has answers to all these questions.”
The power of the Bible to bring healing and hope is the bedrock of American Bible Society’s Bible-based trauma healing ministry. Your prayers and support brought this comforting balm of God’s Word to the war-torn hearts of Armenians in their hour of need.

A Bomb Shelter for the Soul

Bible-based trauma healing is like a spiritual bomb shelter for wounded souls. In a small group Bible study led by a trained facilitator, participants learn about God’s unfailing love for the brokenhearted, engage in the biblical practice of lament, and let go of their darkest memories through storytelling, art exercises, and a culminating time of prayer before the cross of Jesus.

Allow us to introduce you to just three of the grateful Armenians you cared for this past year through your timely provision of God’s healing Word.
“My youngest brother, Rafayel, a major in the army, fell victim in the war,” says a young woman named Hasmik. Before participating in Bible-based trauma healing, Hasmik admits that she dismissed the idea of revealing her deepest, most painful feelings to anyone. But the Bible gave Hasmik and the other women in her small group permission to lament the loss of their precious brothers, sons, and husbands. The Bible provided them with words to weep and pray in the presence of God and a loving church community.

You Wiped Away Hasmik’s Tears

“In the beginning, we were not able to speak about our pain. Our tears would not let us say something. We could not find the words, and most people just didn’t want to be in the same room as us,” Hasmik says. “But recently, I noticed a smile on the faces of mothers who had lost their sons. Their conversations about their sons were of warm memories. They were not shedding tears anymore.”

Hasmik and her husband even named their newborn son Rafayel after her fallen brother—a powerful symbol of new life bursting through the rubble of grief.
“My life has two parts: life before the war and life after the war,” says a teenage boy named Varazdat. “I lost my homeland, my house, my friends, and, most importantly, I lost my grandfather and my uncle because of the war. They had replaced my father, who died when I was five years old.”

You Helped Varazdat Rest in the Psalms

Through your support, Bible Society of Armenia recently organized Bible-based trauma healing groups for the teenagers in Varazdat’s school. Borrowing language from the curriculum, Varazdat celebrates that God’s Word helped him become “unstuck.”

“The discussions and activities in my class from the Unstuck trauma healing book helped me to write about my emotions, which helped me to understand my feelings better,” Varazdat says. “It helped me to see why I often get angry and destroy my relationships with family members and friends. I saw that this behavior is due to my disappointment, sadness, and fear.”

Best of all, Varazdat says he finally found the healthy way to deal with his anger. “It is to read the Psalms and to get more time to pray,” he says. Now, because of your support, Varazdat knows that the Lord is his loving shepherd even in the valley of the shadow of death.
Armenia prides itself on being the first country to formally adopt Christianity in the early fourth century. An incredible 92 percent of the population belongs to the Armenian Apostolic Church, one of the world’s most ancient Christian institutions. You can imagine the emotional and spiritual strain that the pandemic and the war placed upon the nation’s church leaders.

“COVID-19 and the war destroyed everything in our country,” says an Armenian priest named Abraham. “Every day I had burials in my parish. Elder people died because of COVID. Young boys died because of war.”

Even a spiritual leader can feel far from God in the middle of so much suffering and death.

“I had difficulties serving the youth and teens in my parish,” Abraham admits. “It is so hard to talk about God’s will, God’s love, and God’s hope in this situation. My heart was broken.”

Your support equipped Armenia’s church leaders with the strength of Christ at exactly the right moment.

“The Bible Society started this project at the right time,” Abraham says. “The trauma healing training firstly helped me to get peace for myself and to talk about my emotions. I recovered and could continue my service in my parish.”
Thank you, friends, for coming alongside your brothers and sisters in Armenia in this critical time. Because of your generous provision of God’s Word, wounded hearts are rising from the ashes of despair. They are now strong and resilient in the love of Christ.

Thank You for Giving the Gift of Hope

As one trauma healing participant in Armenia puts it, “Many people found God. Hope for tomorrow is slowly reviving.”