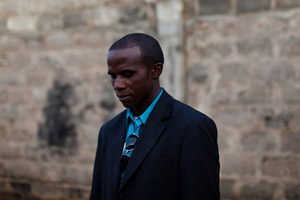 Emmanuel Lighe returned to his former prison in Lomé, Togo with ABS in May of 2011.

Late one night, Emanuel Lighe returned home to find police waiting for him. There was a death in the village, and Lighe's name topped the suspect list. Cuffed and detained, Lighe was questioned well into the night at the police station. He was refused the right to leave.

Hours turned into days; days dragged into weeks. Lighe remained at the police station, then was transferred to Prison Civile de Lomé, the main prison in the capital city of Togo in West Africa's Togolese Republic. He remained there for five years and four days.

Prison Civile de Lomé is a perilous place. Amnesty International cited the prison for its basic human rights violations. Built to house 500 inmates, the prison is packed with 1,800 inmates who live and sleep in one cramped, open-air yard. Infectious disease is rampant, and many prisoners die, often before they've served their sentences.

Lighe spent half a decade of his life in this “hell” — always hungry, always scared, always wondering how he, an innocent man, landed in this place.

“Life in prison is so difficult that it's hard to understand for outsiders: people get raped, beaten up. Money and possessions get stolen. There's a lot of violence and pressure,” he says.

For Lighe, the Bible became a source of life and hope. It inspired him daily to reach out to his fellow inmates, spreading God's Word through preaching and living out its message. Although Lighe struggled to understand why he was placed in prison, God began to teach him that his detainment had a purpose: He was there to minister to his fellow inmates.

“I believe in God's power and God's Spirit so I continued my work because I am not ruled by man,” says Lighe. With his purpose found and forged in the unlikeliest of places, Lighe thanked God for bringing him to prison.

After Lighe was released, he struggled to find work and was lost in the business of daily life. He knew something was missing, so he began to return to the prison regularly to visit friends and continue his ministry. Even though he's no longer a prisoner, Lighe commands the same respect among the inmates. Inside the walls he is the real, breathing picture of God's hope.

In the prison yard, a small space designates “church” for Christian inmates. It is directly adjacent to another small covered space, a makeshift mosque. It is here that Lighe speaks, preaching the Word of God across both spaces. His words are met with affirmation and applause, an audible testament to the power of prayer and the hope found in Jesus Christ.

“A clear conscience fears no accusation,” says Lighe. This message rings loudly through the Prison Civile de Lomé, a place transformed by men like Lighe and the powerful message he brings: there is true freedom in Christ.

In Mali, Josué Dembele feels "immense joy" because of his new Bible

Healing a Child’s Trauma with Scripture

Putting a young child’s broken heart back together in Burkina Faso.