How to Read Through the Bible in a Year With Kids

Journey through Scripture and grow your relationship

One of the most important spheres of influence in which we can lead Scripture engagement is within our own families. But often this is the most difficult place to start! That’s why we asked J.R. Briggs, founder of Kairos Partnerships, to give us some tips. Find out how leading his son in reading through the Bible in a year became one of his favorite leadership roles. Then try it yourself with this one year Bible reading plan or another of your choosing.

While Scripture reading is an important part of my daily rhythm and preparation to lead others in engaging the Bible, as a parent of two sons I’ve thought often about ways to seek out and implement opportunities to read the Bible with my kids. As our oldest son, Carter, turned 10 this year, I saw this as a significant year of his life—a rite of passage, moving from a kid to being a young man. A Christian bar mitzvah of sorts.

And so, I officially invited Carter to join me on an adventure: to read the entire Bible together in a year. If he accepted the challenge, he could choose to go on a trip anywhere in the U.S. on a three-day father-son trip. He accepted—and he was excited—but, admittedly, I had doubts and lots of questions.

What if he hates reading the Bible?

Are we setting ourselves up for failure with too big of a goal? Is this too soon?

What about long stretches of Leviticus and Numbers, where it’s hard to keep the attention of adults, let alone kids?

Would he not want it taking time from his day, every day?

I knew it was a risk. But it was worth it.

Carter and I just completed the challenge last week—and we’re ecstatic. It was one of the most—if not the most—rewarding and formative experiences we’ve had together. It’s also been one of the most rewarding experiences I’ve had as a leader. Now our 7-year-old son has told me that he wants to do this when he is 10 and has already begun dreaming of where he’d like to go on our trip.

Making it Our Kid’s Choice

There’s a backstory. Several years ago, a friend shared with me how he challenged his kids to read through the entire Bible during the year of their tenth birthday. As a reward, they could choose where to go on a dad-kid trip. Carter, who was five at the time, heard my friend share this in our living room. Later that night I asked Carter if, when he turned 10, he would want to read through the Bible with me and go on a trip together, if we finished. His eyes lit up. Over the next five years, he dreamed of where we would go. First, it was Legoland. Then, it was Disney… and then hiking in Colorado with his cousins. Then some major league baseball parks.

When Carter turned 10 we officially began our adventure. He picked out a new Bible and a journal and together we committed to get up early every day and read together. I made sure he understood that I was not forcing him to do this, nor would I ever force him to read the Bible with me. I didn’t nag him about getting to our readings. At any time, he could’ve pull the plug. It was completely his choice, but he was also fully aware that if we did not finish the readings we wouldn’t be able to go on that trip he’d been dreaming about for five years. I wanted him to own the experience of reading the Bible—his Bible. I also felt that he would internalize the material, not simply read the words on a page, but want to know what God wants to communicate to him, to us.

Picking a Plan and Structure

I offered a few different year-long Bible reading plans. One option was reading from Genesis to Revelation, dividing the readings into portions to be covered within five or seven days a week. We discussed this approach and he identified a reading plan that included seven-day readings from the Old Testament, New Testament and Psalms/Proverbs.

Here’s how we’ve structured our time:

(Our morning reading routine takes about 25-30 minutes, depending upon the length of the passages and on how much discussion we allow).

Additionally, to encourage Carter in the process, I’ve asked 10 spiritually mature men (grandfathers, uncles, and a handful of my friends from church) to write him a letter of encouragement, sharing their favorite verse or challenging him to take seriously the process. He loves opening letters addressed to him, learning what these men have to say to him about the Bible. Some dads and kids from church have joined us on the journey. When we see them at church, we ask how their reading is going and what they are learning in the process.

You may be wondering: what about those rated-R stories in the Bible? Certainly, we’ve had our fair share of awkward (but important) “adult conversations” throughout the year about rape, menstrual cycles, infanticide, homosexuality and prostitution, to name a few. Even though they have felt awkward at times, I’m grateful to have the Bible be the conversation starter around these topics for two reasons. First, it shows Carter that the Bible, though written thousands of years ago, is still relevant to us today. Issues surrounding rape, war, homosexuality and violence are in the news regularly. Second, it allows me to beat the culture to these conversations, giving me the first opportunity to address these issues with him before he hears about them from his classmates at school or reads about them through social media. I am encouraged by the way these conversations have gone thus far, and with each conversation another deposit of trust goes into the bank account of our relationship. I’m encouraged that, at times, he proactively asks vulnerable questions and starts many of these conversations himself.

Yes, there are times I’ve been exhausted when rolling out of bed. No, we haven’t read every single day. Yes, there certainly have been a few stretches where it’s been tough sledding (I’m looking at you, Numbers). I’ve even fallen asleep a few times during our readings. There have been a few times that I’ve had to hold back chuckles when our readings involved Carter wearing a Harry Potter robe, with wand in hand. There have been times when we’ve had to double up one day’s reading because Carter had orchestra practice early the next morning or cut a fun activity short to make sure we get our reading in for the day. However, more often than not, we’ve loved the process. At first, Carter talked often about the trip, but after about six weeks, he rarely mentioned it. Now he’s reading Scripture because it’s a priority in his life, a life-giving habit that we’ve formed together.

Parents: if you’re looking for ways to spend quality time with your kids and engage with the Bible more often, consider trying this Bible reading challenge. Yes, it requires sacrifice and an intentional investment of time, but I wouldn’t change it for the world. And neither would Carter. 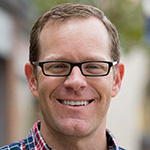 J.R. Briggs started Kairos Partnerships in 2011 where his role is expressed through coaching, consulting, speaking, teaching, equipping and writing to serve a wide variety of leaders, pastors, churches, non-profits, ministries, companies and denominations. Over the past several years, he has invested in kingdom leaders in over 23 states from over 40 different denominations. In addition to starting Kairos Partnerships, he planted The Renew Community, received a master’s degree in Missional Theology at Biblical Theological Seminary, and is currently working on a Doctor of Ministry degree at Biblical. His doctoral thesis focuses on how question-asking in leadership can advance God’s mission. He is an author, co-author and contributed to nine books that seek to equip and care for kingdom leaders. J.R. and his wife Megan have been married for over 16 years and have two sons, Carter and Bennett.