Now is the Time: Reimagining Women in the Bible

In this blog series, pastor and author Rev. Dr. Nicole Martin will tackle the main issues that may prevent women leaders from engaging with Scripture and discuss ways to develop women through the power of God’s Word. Together we will learn to see through the eyes of women who lead and discern ways to strengthen and empower women wherever God calls them to serve.

“Why watch reality television when you can read the Bible?” With a slight chuckle and a sincere smile, my Sunday School teacher began to explain why the Bible had more drama than what Hollywood calls “real life.” She began to take us through stories of Adam being tempted by Eve, Ahab being manipulated by Jezebel, Samson being deceived by Delilah, and the classic drama of Solomon and David being drawn away from God by women. I can still remember hearing her walk through each story with vivid detail, making the class feel like we were watching a movie.

While her depictions were fascinating, the reality she unfolded was one full of “good guys” and “bad girls.” The men in her stories were striving toward faithfulness to God while the women were skilled in distraction and deception. Long before the Lifetime Movie Network, these women were typecast into roles that were far from what any Christian woman would want to be. Over time, women have been encouraged to be more like Job and less like his wife, to see themselves in faithful illustrations of men rather than the carnal portrayals of women. If we learn anything from these “bad girls,” we learn how not to act, how not to live, and how to learn from their mistakes. If we are not careful, well-meaning Sunday School teachers can send the message that women are innately sinful while men are innately good.

My Sunday School teacher was right about one thing: the Bible is full of dramatic stories. But, how we tell them can make the difference between women being engaged or disengaged in the reading of God’s Word. For centuries, some women have been told Bible stories in ways that undermine the value of women, relegating them to persons to be seen and not known. While it is true that Scripture is replete with stories of bad girls (and boys), it is chock-full of stories of good ones, too.

Take, for instance, the woman at the well in John 4. Most people have understood her as a woman who had problems with men, constantly going from one boyfriend or husband to another. Some have described her as a lustful woman, a serial-wife, and even a prostitute. But, could there be something else there that creates depth to her character and purpose for her life?

If we take another look at this woman, we’ll see that Jesus saw more in her than just a woman with issues. He saw her as one who had potential to impact an entire village for God’s glory. This woman encountered the Living Water and was so transformed that she began to tell everyone she knew about her life-changing experience. Jesus invited her to share in the gospel by spreading the Good News in a way that was unique to who she was and where she lived.

The woman at the well is just one example of a story that can be retold to glorify God and edify women and men. We can retell the story of Abigail as an instrument of God’s grace, Jael as a reminder of God’s judgment, and the women who supported Jesus as symbols of God’s provision. We can even retell the story of Mary, the mother of Jesus, not simply during Christmas, but year-round as an example of one willing to participate in God’s work. There are countless stories of God raising up women as leaders and each is begging to be retold.

“If you keep quiet at a time like this, help will come from heaven to the Jews, and they will be saved, but you will die and your father’s family will come to an end. Yet who knows—maybe it was for a time like this that you were made queen!” (Esther 4:14 GNT)

The story of Esther is one that reminds us that timing is everything to God. In the same way that Mordecai urged Esther to make the most of her time we too can encourage women to make the most of God’s calling for times such as these. Now, more than ever, young women and leaders are tempted to believe that cultural narratives of who they should be are far more appealing to women than what is described in Scripture. For so many, it seems easier to become more like pop stars than to live like Jesus.

If we remain silent on God’s love for women and men alike, we risk leaving women to find themselves in the images of current culture rather than seeing themselves made in the very image of God. By telling the true story of the Bible, we make the most of our time by empowering women and men to reach their fullest potential in Christ. 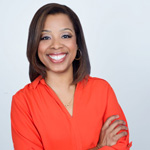 Nicole Martin currently serves as the Vice President of Church Engagement and Executive Director of Trauma Healing. She joined American Bible Society in 2016 as a City Mobilizer in Charlotte, NC and later served as the Director of US Ministry, supporting Scripture Engagement efforts in cities across the US.

A former management consultant with Deloitte Consulting in Chicago, Martin has also previously served as an Executive Minister at a multi-site church in Charlotte, NC. Martin teaches courses in Ministry and Leadership Development at Gordon-Conwell Theological Seminary and is the author of two books: Made to Lead: Empowering Women for Ministry and Leaning In, Letting Go: A Lenten Devotional. Martin has authored several articles that have been featured in USA Today, Christianity Today, and The Charlotte Observer. As a nationally recognized speaker, Martin has been inducted into the prestigious Dr. Martin Luther King Jr., Board of Preachers at Morehouse College.

Martin is a graduate of Vanderbilt University with a triple major in Human and Organizational Development, Educational Studies, and French. She earned her Master of Divinity from Princeton Theological Seminary and her Doctor of Ministry from Gordon-Conwell Theological Seminary. She serves on the Board of the National Association of Evangelicals and is also a member of the Board of Trustees at Gordon College in New England. Martin currently resides in Baltimore with her husband, Dr. Mark Martin, and their two daughters, Addison and Josephine.