“A Message from Heaven Delivered by Aeroplane”

A century ago, Bibles dropped from the sky. We could use some Scripture from above in 2020 too.

American Bible Society has a long history of sharing God’s Word by all means possible. In 1817, we loaded Bibles onto the U.S.S. John Adams—a Navy vessel that fought pirates. In 1860, we custom-made Bibles for the riders of the Pony Express as they delivered mail between Missouri and California. In 1864, we were the first to furnish railroad cars with Bibles for the transcontinental railroad. For decades, we employed colporteurs to go door-to-door across our nation until every American had a Bible. Boats, horses, trains, and automobiles—we employed many methods to distribute God’s Word.

Perhaps more surprisingly, on more than one occasion, we dropped Scripture from the sky.

An article from a 1919 issue of Record magazine reports that 2,000 copies of The Gospel According to Saint John were dropped from an airplane as it flew between San Francisco and Sacramento, California. For those who care about specifics, the article cites that the plane took off at 3:30 p.m. on July 26, 1919 and flew for 100 miles at an altitude of 4,000 feet. It landed in Sacramento around 5:00 p.m., where a crowd of people was waiting to celebrate its historic venture.

As the plane landed, the Rev. C.E. Ranck, visiting from China, read Revelation 14:6 (KJV): “I saw another angel fly in the midst of heaven, having the everlasting gospel to preach unto them that dwell on the earth, and to every nation, and kindred, and tongue, and people.” Those in attendance thanked God that all people— including Californians—could receive his Word. People jostled to get their hands on one of the remaining copies of Scripture that had taken such a momentous journey.

As we face COVID-19, it’s worth noting that when this Scripture distribution flight took place in 1919, America was fighting the Spanish Flu. This pandemic forced people into masks, spread fear of disease, and killed more than 675,000 Americans. Isolated and ill, people needed a reminder of God’s nearness. When they needed it most, they received the Good News from the sky.

Today, we’re not dropping Bibles out of planes, but we are still sharing the peace of Jesus through Scripture. In fact, we developed a resource called Beyond Disaster: A Survivor’s Guide for Spiritual First Aid that helps people find God on the other side of crisis. Thanks to our generous financial partners, more than half a million copies of Beyond Disaster in 20 different languages have reached hurting households this year. This resource is now available for all to download at beyonddisaster.bible.

Whether we’re dropping Scriptures from the sky or uploading them to the cloud, American Bible Society is committed to sharing the life-changing message of God’s Word!

Searching for God’s comfort? You too can download Beyond Disaster resources like a small group study, a video series for first responders, and a guide for helping kids 8–12 cope with COVID-19 at beyonddisaster.bible 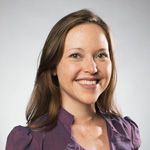 Laura C. has a goal of bringing clarity and an audience to deserving messages, so she writes content for the American Bible Society. She has an MA in English from Middlebury College, and her StrengthsFinder test results are: positivity, individualization, strategic, learner, achiever. And yes, it bothers her that “strategic” is the only adjective in that list.

The LORD says, “I will restore my people to their land and have mercy on every family; Jerusalem will be rebuilt, and its palace restored.”