Elias Boudinot brought us American Bible Society and Thanksgiving as a national holiday.

What do the founding of Thanksgiving Day and American Bible Society have in common?

Although he’s sometimes forgotten by the history books, Boudinot is one of America’s founding fathers. He served as a New Jersey Congressman, president of the Continental Congress, director of the U.S. Mint and American Bible Society’s first president.

And we have him to thank, in part, for Thanksgiving as an American national holiday.

Boudinot’s support for a day of thanksgiving, his dedication to public service, and his later motivation for founding American Bible Society were rooted in a passion for God’s Word.

On September 25, 1789, this passion drove Boudinot to declare before the U.S. House of Representatives that prayer and thanks were due to God for America’s existence. According to the Annals of Congress, Boudinot stated that he “could not think of letting the session pass over without offering an opportunity to all the citizens of the United States of joining with one voice in returning to Almighty God their sincere thanks for the many blessings he had poured down upon them.”

Although many members of the House dismissed his proposal, Boudinot stuck by it. Almost two weeks later, President George Washington warmed to the idea.

On October 3, 1789, Washington distributed a Thanksgiving Proclamation to the Governors of the States, calling for the “institution of a national day of prayer and thanksgiving” and for “Thursday, the 26th day of November…to be devoted by the people of these States to the service of that great and glorious Being who is the beneficent author of all the good that was, that is, or that will be.” 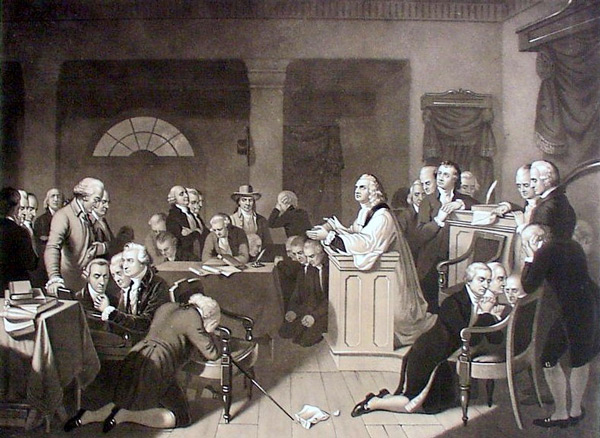 Today, Boudinot’s legacy continues not only through Thanksgiving, but through Bible ministry around the world. Together with a global network of partners, American Bible Society is working to accelerate Bible translation abroad, help people in the United States engage with Scripture, and bring the healing power of God’s Word through Bible-based trauma healing.

So when you sit around the Thanksgiving dinner table this year, thanking God for the work he has done, pause a moment to reflect on the legacy of Elias Boudinot. It turns out that we have a lot to thank him for.