Conflict in the Congo 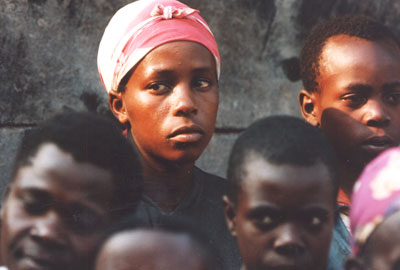 Fighting in the east of the Democratic Republic of Congo (DRC) has forced more than a million people from their homes. It is also preventing the Bible Society from carrying out its ministry among the refugees.

Since our prayer request was sent out to the UBS fellowship in September, the situation has worsened. Fighting has intensified between rebel factions and the army in the areas north of North-Kivu province. People have been forced from their homes, and then often watched them burn to the ground before fleeing for their lives.

"No schools, no markets, and the airport has been closed since October 27," said a United Nations (UN) radio broadcast. A provisional report announced nine deaths, three serious injuries, three young victims of rape, and shops and houses looted. The loyalist soldiers have left Goma. The rebels are advancing on the town, but have been temporarily held back by UN forces. 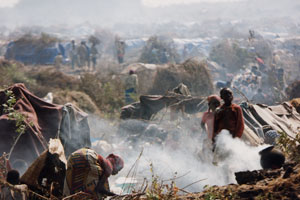 The humanitarian situation is critical. There is an urgent need for intervention in order to prevent the outbreak of disease. The refugees are without even the basic essentials; they feel abandoned and are losing hope.

Jean Mateyabo, area secretary for the Bible Society in the east of DRC, based in Goma, was on his way back from Kinshasa after attending the Bible Society's Annual General Meeting, but he is now stuck in Kisangani, as there are currently no flights to Goma.

The conflict around the Great Lakes (DRC, Rwanda, Uganda and Burundi) dates back to 1994, when the Hutu-majority Rwandan government was overthrown. Hutu loyalists were allowed to cross the border into DRC and set up home, taking their weapons with them. The current Rwandan government, of Tutsi majority, continues to encourage the armed groups in DRC to stage a rebellion, "in order to secure our borders", it claims.

In pursuit of the Hutus responsible for the genocide, the governments of Rwanda, Uganda and Burundi supported armed groups which managed to topple the Kinshasa leadership in May 1997. Having failed to further their cause, they are currently supporting the deposed General Laurent Nkunda.

Efforts towards restoring peace in the east of the country have failed many times. This was the case, notably, with the democratisation process, which led to the setting up of new institutions in 2007, as well as the 'Amani' program ('Peace' in Swahili, the language spoken in the east of the country), whose aim is to reconcile the 30 or so armed groups in the Kivu region.

Under the current circumstances, the Bible Society can no longer distribute Scriptures in remote areas; the distribution vehicle is only able to supply bookshops and churches in Goma city itself. In fact, at present even Goma cannot be supplied, because it is surrounded by groups of armed militia.

Humanitarian aid and spiritual comfort are vital for the refugees, and the Bible Society is doing everything possible to make Bibles available to them, so that these people may find hope and inner strength to sustain them until they can return home.

Haiti 14 Months After the Earthquake

To view this photo slideshow you need to have Flash Player 9 or newer installed and...