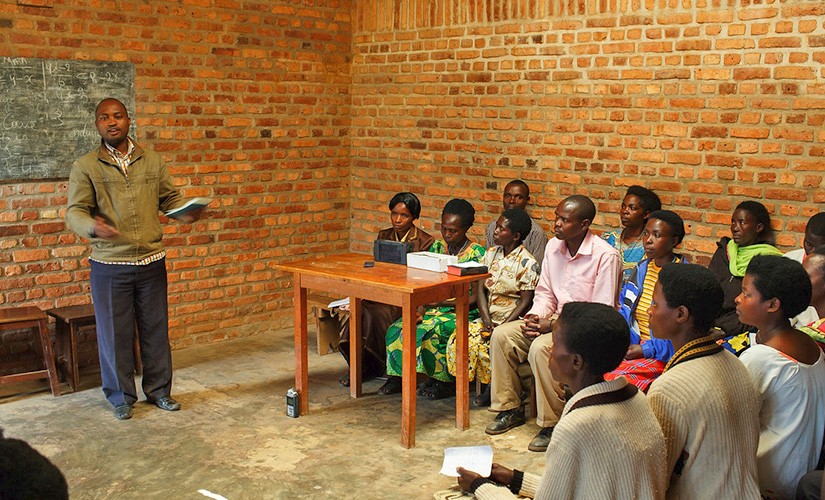 Again and again, Willy accepted the inevitable. But this time, with his life winding down, he had one nagging thought. “How will I be remembered?” he asked.

His legacy would not be his years in the mine. That meant little to him. But because of the generosity of Bible Society friends, Willy found his calling in his golden years. With their support, an Audio Bible Ministry came to his community and Willy discovered his life’s true work.

A volunteer from the Bible Society introduced Willy to the End to End Ministry, which gives people the chance to hear the New Testament on Audio Bibles. People are encouraged to join a listening group that meets weekly to listen to Scripture together. It was perfect for Willy, who always struggled to read.

“Joy filled my heart after she explained to me the whole idea of the program,” says Willy. “I requested to join immediately. I knew very well I might get a chance to share the Word of God with my fellow elderly people.”

Willy organized four listening groups at the nursing home. Each meets weekly. He also organizes fellowship times that bring the four groups together. “I make sure my group members receive and listen to the talking Bible, and I find out what they heard and learned,” he says.

The Audio Bible has also given Willy the chance to connect with his heavenly Father in an intimate way.

“The talking Bible speaks directly to me in my language. I didn’t have to read my print Bible that I used to struggle to read. I tell you my faith returned now that I can hear God speak to me directly in my own language,” he says.

The support of American Bible Society’s financial partners helps make stories like this possible! We are grateful for their generosity in reaching out to communities around the world that need the hope and assurance found in God’s Word.

A vibrant Bible partnership is inspiring Rwandans to love their neighbors in remarkable ways.

“Without the Bible, I could be a lost girl”