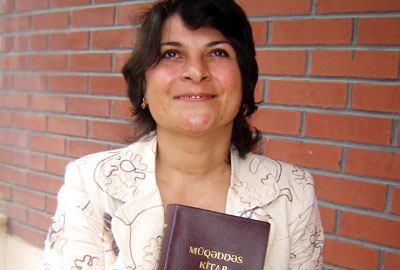 June 5 was special for the book company Kitab Shirketi because it was when the very first complete Bibles in Azeri arrived at its offices in Baku, the capital of Azerbaijan. Kitab‘s director, Gulshan Huseynova, wasted no time and immediately telephoned dozens who had been eagerly awaiting the new Bibles. “You can imagine the great joy Gulshan felt when she was able to tell the good news that they could come and collect the Bibles they had ordered the following day,” said Fatima Masimova, Kitab‘s accountant.

And they did come: early the next morning customers began arriving to pick up their copies. And on Sunday, as Christians gathered to worship and study the Bible, the new Bibles were brought out and celebrated.

Fergana Davudova, 37, who became a Christian in 2001, was joyful as she described her experience. “Before I became a Christian I lived in fear. I was searching for hope and had the desire to know the true God,” she said. “But the religious books I read, which were not in my own heart language of Azeri, did not speak to my soul.”

This Congolese woman and many like her are being helped through ABS's Restoration...