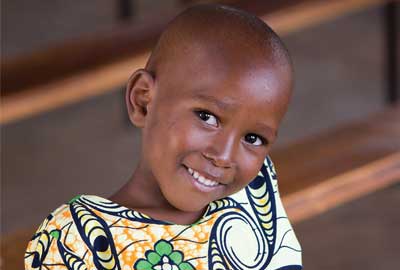 Riding through the rural countryside of Burundi, you cannot help but be impressed by the vastness of the African landscape. One easily could get lost traveling the cratered roads that twist along the lakes, mountains and forests. Despite the fact that Burundi is one of the most densely populated countries in sub-Saharan Africa, you can travel for miles without seeing any sign of people. Around one bend, our driver pointed to a densely forested mountain range and said, “That is where the rebels live. It is not safe to go there.”

While 70 percent of Burundi’s population identifies itself as Christian, the remaining 30 percent is often located in remote, hard-to-reach areas of the country, burdened by poverty, with little access to public services and threatened by violence and warfare.

Burundi’s story is the story of much of the world. End to End (E2E) is an unprecedented, coordinated effort to bring Christ’s hope to those who do not know the transforming power of the gospel.

The E2E project addresses this problem and seeks to help finish the work of the Great Commission in 15 nations and a variety of languages in Africa.

These remote places are home to large scale ministry challenges. United Nations Educational, Scientific and Cultural Organization (UNESCO) states that there are around 2000 distinct languages in Africa alone — roughly one-third of the world’s linguistic heritage. It is estimated that over two billion people, or 30 percent of the world’s population, have virtually no exposure to the life-changing gospel of Jesus Christ. 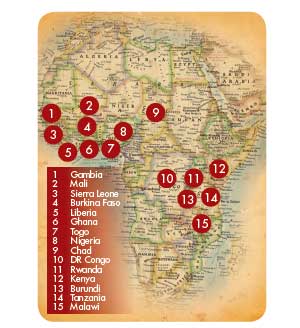 There are 6,900 known, living languages in the world. Some 2,479 have at least a portion of God’s Word translated. According to Wycliffe Bible Translators, there are approximately 2,000 translation programs currently in progress for languages without adequate Scripture worldwide. While the statistics cannot fully reveal the reality of how many languages have no Scripture translation — and in the absence of clarity on this among translation organizations — all groups involved can agree that it is urgent that we all continue to do our part in fulfilling the Great Commission. The Bible Societies place themselves at the epicenter of this challenge.

These challenges, together with growing social needs, make Africa a strategic place to invest in sharing the gospel, raising up Christian disciples and establishing and strengthening the local church.

There are organizations working to address these challenges. However, for many ministries working in these remote areas, outreach efforts are limited to the scope and resources of the individual organization. Where a large-scale, comprehensive approach is necessary, many of the organizations specialize in a single approach.

The project implements a multifaceted strategy that includes Bible translation, JESUS Film showings, audio and printed Scripture study groups, church planting and growing locally-led church movements in each country. The power of this project is in the strengths that each partner brings to the corporate whole. Each organization works under the motto “no logo, no ego.” The partners understand that they are stronger together, and so make every effort to adapt their unique ministry strategies for the sake of the larger project. The result is an unparalleled opportunity to change lives.

John Walter, director of ministry advancement for the American Bible Society, states, “E2E provides a unique opportunity for the Church in the West to work with the Church in the unreached areas of our globe, hand in hand as equals, to respond to the call of the Great Commission as one big family. The local church understands the culture and the language and has a better chance of surviving the hazards of the often-challenging environment of unreached people groups.” 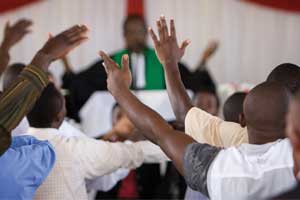 Coordinating the Process of Life Change

To date, this project is being piloted in Nigeria, India and Brazil. The Nigerian pilot is furthest along, and the results are inspiring: the JESUS Film has been shown in Nigeria, and after six months four church-planting movements have planted 14 churches and established seven listening groups using FCBH Proclaimers© in Hausa, each with an average of 10 people per group.

The Nigerian pilot focuses on the southeastern state of Taraba, home to over a million people and more than six ethnic groups. Taraba is a remote state that shares a border with Cameroon. It is characterized by rugged terrain, poor infrastructure and a lack of government support. Many residents are illiterate and live well below the poverty line. Many have never had an opportunity to hear the gospel message. But with the E2E program, it is hoped Taraba will become a state known for its vibrant Christian churches and devoted followers of Jesus.

One JESUS Film worker explained that during a visit to the Taraban community of Kusung, the village chief decided, after much prayer and an endorsement from one of their tribal men, to allow the E2E team to stay. He writes, “The chief of the village convinced the community to accept the End to End program on a trial basis. Praise the Lord that, during the very first film (JESUS Film) shown, 42 people gave their lives to Christ . . . One day the chief priest came to our men and said ‘Please hold on to this your God, for he is a living God and will surely help you.’”

The E2E project is tailored to the specific needs of the local community. If needed, Scripture is translated into their heart language. Then, the JESUS Film is shown in local villages, followed by the establishment of new churches and study groups using audio and written Scripture. E2E gives villagers a unique opportunity to meet and learn about the person of Christ in a comprehensive format, in their own language and in a culturally sensitive way. In the end, indigenous Christian leaders implement a program to continue the intensive discipleship and leadership development. This follow-up program supports the leaders of new church plants and helps them send out more leaders to neighboring communities.

The American Bible Society has a critical role to play in this project. Connected to national Bible Societies in some 145 countries and territories, ABS has a unique opportunity to identify and equip frontline ministry leaders in many of the E2E project areas. Bible Society staff on the field have a real-time perspective on the strengths and needs of local communities, as well as needed support from governments and church leaders. Additionally, ABS has a history of experience in implementing organized, powerful and sustainable projects.

Pascal Folly, senior research analyst for Global Scripture Impact, writes, “The End to End project gives international and local partners the opportunity to play their part in fulfilling Christ’s Great Commission, planting new churches by using a variety of Scripture tools. This is an opportunity to empower the local church to fulfill its call, using its best talents to serve its people. The best people to reach the unreached are their peers — people who speak their language, understand their culture and can relate to their unique historical, economic and religious realities.”

With poverty, civil unrest and social challenges on the rise, people need the transforming power of the Word of God more than ever.

Driving through Burundi, one cannot see the people living hidden on the mountainside, but God can see them. God knows each person by name and loves him or her completely. E2E invites us to join in Christ’s work, helping to bring people into restored relationship with God and with their neighbor.

The fulfillment of the Great Commission is possible. The E2E program is a strategic and effective way to help clear a path for God’s Spirit to transform local communities, regions and countries. Partnering with other ministries produces a coordinated, organized effort to introduce people to Jesus, grow their faith and establish locally-led, mission-minded churches throughout Africa, Latin America and the rest of the world.

Bringing the Healing of God’s Word to South Sudan

The Bible encourages a people traumatized by civil war to find hope in God.