RecordAmity & Around The World & Asia & China & Churches In China & Heal 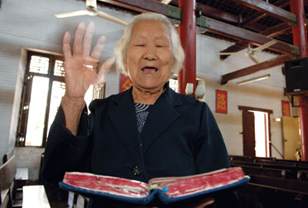 Mei Changlan, 85, is in the fullness of the spirit as she reads from Psalm 91. She has only recently learned how to read. Photo by Dag Smemo/United Bible Societes

On September 11, 2007, the 50 millionth Bible rolled off the presses at the Amity Printing Company in Nanjing. While the world mourned the tragedies of 2001, we in China were also reminded of God's goodness in providing us with a living Word.

The establishment of the Amity Press was truly one of God's miracles. During the horror of the Cultural Revolution in the 1960s and '70s, all churches in China were closed; Bibles were banned, confiscated, burned and destroyed. Who could have imagined, then, that a Bible printing press would be allowed? But in 1987, Amity Printing Press was established with donations from supporters of the Bible Societies. This was a dream come true for China's Christians. At last, the Bibles that previous authorities had tried to eradicate could be printed legally and openly, with the support of the government.

And miracles continue to take place. The gospel message is spreading, affecting the lives of millions of people and sprouting seeds of hope.

Through contact with the living and eternal Word of God (1 Peter 1.23), people are coming to faith. One inspiring story is told by Ms. Shen Xiaoping, a novelist who loves to read books of all kinds. One day her Christian neighbor gave her a copy of the Bible, saying, “This is the best book in the world. Choosing to ignore it would be the greatest loss of your life.” Shen accepted the Bible, unable to imagine that she had read so many things in her life and never come across the “best book in the world.”

But it was years before Shen read the Bible. She remembered it only when she was due to go for an extended stay and medical checkup at the hospital. She took the “best book” with her and began to read. She read through every page of it in four days, unable to put it down.

Not satisfied with her initial reading, Shen decided to read it again, more slowly. This time it took her 11 days. By the time she finished rereading its pages, she had made a decision to believe in the Lord.

The Power to Heal

The Word of God is alive and active (Hebrews 4.12). Lives are being transformed, and communities are changed. Another powerful example of its impact can be seen within the Lahu Christian community, a testimony to the transforming power of the gospel for both individuals and their entire communities.

The ethnic Lahu people live in Yunnan Province, in the southwest part of China. Nearby in the Golden Triangle, some of the largest opium fields on the planet fuel a rampant trade in illicit drugs. Because of their proximity to the fields, many poor Lahu people suffer with addiction. Coming to faith in Christ has helped many of them kick the drug habit and find the strength to clean up their lives.

A local government official told the story of a Lahu man, Zhang Zasuo. Zasuo had a severe problem with drugs and had sold all of his family's belongings to feed his addiction. When he heard the gospel and became a Christian, he found the strength to get sober. Every night before going to bed, he would read his Bible. Although he had been taking drugs for five years, he found a way to stop entirely in less than a week, and not look back.

As belief in Jesus spread among the Lahu, more and more of them found the strength to give up their addictions. In this and other ways, the Lahu communities are being transformed by the gospel.

Where Three Are Gathered

The distribution of the Word of God has also led to the establishment and the growth of many churches. The Tangshan Church in Jiangsu Province, for example, has a remarkable history behind its foundation: a powerful engagement with the Bible.

In the early '90s, a woman known as Grandma Tang who lived in the town of Tangshan suffered serious head injuries in a car accident. For weeks she could hardly move. One day her Christian nephew visited her and encouraged her to read the Bible.

As she read it, she experienced the love of God. Her body began to heal. When she was fully recovered, she gathered her two other elderly friends and the three began meeting for prayer and Bible study. Their small gathering grew in numbers and, before long, they purchased an old house for their weekly meetings. The group continued to grow and eventually they purchased a plot of land on which to build a church. Today as many as 1,000 people attend Sunday worship at the Tangshan Church — a sizable congregation, all born out of one woman's powerful encounter with the Bible.

The wide distribution of the Bible in China has caused it to take root in wonderful ways. It truly shows what happens when the seed falls on good soil and produces a crop, yielding a hundred, sixty or thirty times what was sown (Matthew 13.8, 23). Through the distribution of the Bible in China, many are coming to faith in Christ, lives are being transformed, communities are being changed, churches are being established, and the Christian faith is growing.

As with the early church, the Word of God continues to increase in China. The Word of the Lord is indeed growing in influence and power. Praise the Lord for this, his miracle!

“I know Jesus loves me.”

Your support is providing Bibles to children in Southeast Asia.

Sending Scriptures into Cambodia where God is transforming lives