Believers in China's rural Yunnan Province are encountering God's Word in their many heart languages. 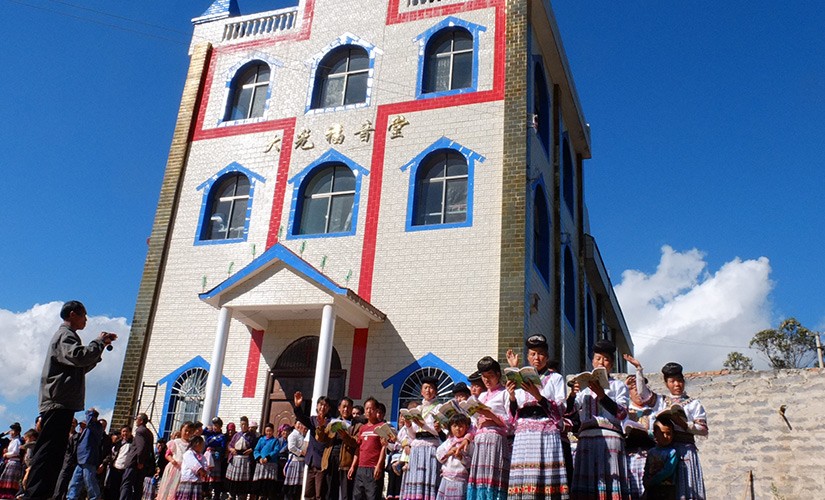 Wang Xiufang has experienced a lot of change during her 91 years on earth. Over the course of her lifetime, she witnessed the rise and fall of Mao’s Cultural Revolution in China. She and her husband founded one of the first Christian churches for the Miao people in rural Yunnan Province, gathering 50 believers in their tiny mud home. And for 14 years, Wang raised six children while her husband was jailed for his Christian faith.

Although she has endured much upheaval in her lifetime, Wang begins every day in the same way: She takes a seat on her front porch, cracks open a large, weather-beaten Bible and begins to read.

It’s a predictable ritual; amid the geese and goats that scuttle through their village, Wang’s neighbors know where to find her. But in Yunnan—a mountainous, agrarian province in southwest China—Wang’s daily Bible reading is not just predictable, it’s a miracle. For the farmers of Yunnan, finding a Bible to read is not an easy task.

This difficulty stems from one of Yunnan’s great assets—its diversity. Yunnan is home to more minority ethnic groups than any other province in China. Of the 800,000 Christians in Yunnan, 85 percent speak one of the various minority languages used in southwest China. These Christians get little use from China’s widely accessible Mandarin Bible translation and are still waiting to access God’s Word in their heart languages.

At the end of 2015, President and CEO of American Bible Society Roy Peterson visited several minority people groups in Yunnan Province with his wife, Rita.

“These minority language groups are alive and well, though living their lives marginalized from the national language and education,” says Peterson. “To experience the hope of the gospel, these people groups need God’s Word in their heart language.”

That’s why American Bible Society has been working with United Bible Societies China Partnership since 2000 to translate the Bible into seven of Yunnan’s minority languages and to distribute Bibles throughout Yunnan’s mountain communities. By rejecting a one-language-fits-all approach to Bible translation and distribution in China, American Bible Society and its partners are seeing God’s Word become available and alive for faithful believers in Yunnan.

For believers in Yunnan to hear the voice of their heavenly Father in this way, they typically need three things: an accessible Bible translation, an ability to read the Scriptures for themselves and ongoing access to qualified Bible teachers.

Telling it on the Mountain

Meeting Yunnan’s unique spiritual needs starts with Bible translation work. But most ethnic minorities in the province are subsistence farmers. They rely on resources from American Bible Society’s financial partners to provide the support and technology for efficient Bible translation work that simply would not be available otherwise.

“To experience the hope of the gospel, these people groups need God’s Word in their heart language.” —Roy Peterson

And even as translators in Yunnan attend to God’s Word, they do not leave the cares of their daily toil behind them. “It is challenging as I need to tend the farm three to four times a year during the sowing and reaping season,” says leader of the White Yi translation team Li Wanxing.

Li is one of 60,000 Christians in China who speak White Yi. Until now, his people have never had a Bible in their heart language.

“But by God’s grace, we did it,” he says of the translation project. In early 2015, more than 300 White Yi Christians donned their traditional, rainbow-colored costumes to celebrate the launch of the White Yi New Testament.

Li could not be happier to see his fellow White Yi people encounter God on the pages of Scripture.

“It means a lot for us to have God’s Word translated and expressed in our own language,” he says. “It is not enough for us to only listen to God’s Word, we need to read it too.”

But for poor agricultural workers, the ability to read—even one’s own heart language—is not a given. Minority languages like White Yi are not taught in local schools. That’s why a second component to Bible ministry in Yunnan is Scripture-based literacy classes, so that minority people groups can learn to read the Bible with relative ease.

Perhaps the greatest beneficiaries of these literacy classes are the children of Yunnan, who are now receiving an education in their cultural heritage and in the story of the Bible.

“I thought I knew what the Bible said in Chinese. But when I read it in Miao, I realized that I didn’t actually know what it said.” —Miao Translator

“The church can use [the New Testament] to teach our young people the language,” says church elder Li Wangsan. “Our children are coming to church after they finish school in the afternoon to learn the White Yi language.”

And when it comes to ongoing Bible education in Yunnan, the adults don’t get left out. As a third step to making the Bible come alive in Yunnan, Bible Societies are mobilizing Christian preachers to bring God’s Word to the rural villages scattered throughout the mountains of southwest China.

Specifically, 14 preachers have been outfitted with motorcycles, which help them more easily navigate the rough terrain of Yunnan. Trips between multiple churches that used to take 5–6 hours on foot now only take 1–2 hours via motorbike, says Ng of United Bible Societies China Partnership.

While there is still much work to be done in Yunnan, God’s Word is already bearing much fruit as ethnic minorities read the Bible in their heart languages for the very first time.

“I thought I knew what the Bible said in Chinese,” says a Miao translator. “But when I read it in Miao, I realized that I didn’t actually know what it said.” And testimonies like this are not uncommon.

“Minority people always tell us how blessed they are to have the Bible in their own mother tongue,” says Ng. “It greatly benefits the people of God.”

Thanks to the faithful financial partners of American Bible Society, Bible-readers like Wang Xiufang are increasingly common in Yunnan. As God’s Word continues to spread throughout China, more Christians will join her every morning, opening newly translated Bibles in their own homes to encounter God in the pages of Scripture.

Praying for God’s Word in Every Heart Language

Honoring the Work of Bible Translators on International Translation Day

You need to see what happens when someone, after waiting her entire life, finally holds...