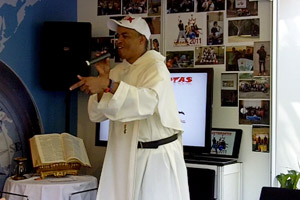 Fray Richard raps to a group of Catholic teens at a youth rally.

Fray Richard can testify that he serves a God of surprises. When he took his vows, he just wanted to be a disciple of Christ serving the Catholic Church in Latin America.

Little did he know he’d become the “rapping priest” who travels the world, proclaiming God’s love through rap, raggaeton, hip hop and other styles of urban music.

At 6 foot, 3 inches tall, Fray Richard is a striking figure. Belonging to the order of Our Lady of Mercy, he wears a full-length white robe, fastened with a belt and draped with a cowl. When he’s in casual clothes, he dons a baseball cap, jeans, T-shirt and sneakers.

To see him in relaxed dress, you would think he’s just an ordinary guy. But when you talk to him, you get a picture of a deeply spiritual man who’s passionately committed to sharing Christ’s love with everyone.

Rap to Us, Don’t Sing to Us
Fray Richard began his career as the rapping priest by accident. Because he had an affinity for prisoners, he would often visit inmates, preaching God’s message of forgiveness, salvation and love.

One day in 1989, a group of prisoners challenged him to share his message in rap—a medium of communication that spoke directly to their minds and hearts. “We think in rap, we talk in rap, we communicate in rap,” Fray Richard recounts through a translator. “So rap to us.”

Fray Richard refused. Rap was birthed in marginalization, violence and sexual innuendo. Up to that point, it has never been used to glorify God.

But the prisoners pressed him. “Your message is very important,” they told Fray Richard. “But it would be better received if you did it through song in a style and manner that spoke to us.” Again, the priest declined and began to feel distressed.

As a young man, Fray Richard had been part of a gang. When he turned his life to Christ, he rejected that world and all it entailed, including rap music. “When they asked me to rap, I felt like I was going back to the time before my conversion,” he shares. “I was struggling with myself, and I was really afraid.”

The prisoners didn’t accept Fray Richard’s refusal and instead started to beat a rap rhythm. “Come on,” they urged. “Rap to us.”

Put on the spot, Fray Richard didn’t know what to do. Suddenly, he began to rap God’s message of love and forgiveness. No one was more shocked than he. “The Holy Spirit inspired me,” he says. “I was calling upon him to help me. Otherwise, I couldn’t have done it.”

The prisoners were ecstatic and invited other inmates to services Fray Richard officiated. “They invited me into their world with a message that was different,” he says. “It was God’s message.”

Sharing the Gift
For a while, Fray Richard rapped strictly in Latin American prisons. The Catholic Church is conservative, and no priest had ever used rap as a style of praise to God.

But that changed when he gave a presentation to a group of nearly 300 teens at a youth conference in Guatemala.

A bit unruly and excited, the teens didn’t pay attention to Fray Richard after he repeatedly asked them to stop talking. So he began rapping. Instantly, the room quieted, and the teens stared open-mouthed at him. Rapping reached them in a way that words alone—and typical Catholic hymns—couldn’t.

From that point on, Fray Richard knew that rapping God’s message would draw many into the arms of Christ. He now has two albums, “The Christian Rap” and “Are We There Yet?” and has performed at concerts throughout Latin American and Spain. He also has toured numerous cities in the United States, including Los Angeles (14 times), Chicago (seven times), Miami, Orlando and Atlanta.

Major newspapers, such as The Washington Post, interviewed him, and he has appeared on international TV news programs, including the BBC. He writes his own music and draws inspiration for his lyrics through quiet prayer time and Scripture reading.

God’s Love Is Habit Forming
When performing, Fray Richard wears his habit, testifying that he’s a man of God. “Some people think my robe is a costume. But it’s not a costume. I am a religious, and that’s why I wear it.” He sees himself as God’s rapper, not a man who has talent for urban music.

Fray Richard is so popular that Sony Records began eying him. The record label company offered him a lucrative contract—$10,000 per month to his parish—if he rapped without his habit and didn’t sing about God.

“If I don’t talk about God, this makes no sense. There is no rapper without the friar,” insisted Fray Richard. “I said, ‘If you’re not interested in the priest, then I’m not interested in you.’” He walked away from Sony.

Fray Richard donates all the money he makes to the needs of his parish in Panama City. He has difficulty dealing with fame and openly admits that he doesn’t like it. “I didn’t see the reach this was going to have.

“But I didn’t invent the Gospel or rap. I’m God’s rapper. To him be all the power and the glory.”