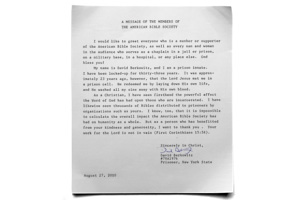 American Bible Society's God Sets You Free™ program hosted a Correctional Chaplain Conference in August at which the life-sentence inmate, David Berkowitz, was permitted to address those in attendance with the personal letter shown below.

A Message to the Members of the American Bible Society

I would like to greet everyone who is a member or supporter of the American Bible Society, as well as every man and woman in the audience who serves as a chaplain in a jail or prison, on a military base, in a hospital, or any place. God bless you!

My name is David Berkowitz, and I am a prison inmate. I have been locked up for thirty-three years. It was approximately 23 years ago, however that the Lord Jesus met me in a prison cell. He redeemed me by laying down His own life, and He washed all my sins away with His own blood.

As a Christian, I have seen firsthand the powerful affect the Word of God has had upon those who are incarcerated. I have likewise seen thousands of Bibles distributed to prisoners by organizations such as yours. I know, too, that it is impossible to calculate the overall impact the American Bible Society has had on humanity as a whole. But as a person who has benefitted from your kindness and generosity, I want to thank you. Your work for the Lord is not in vain (First Corinthians 15:58).

Lifting Hearts along with Grades

Putting opportunity in the hands and hearts of Philly's kids