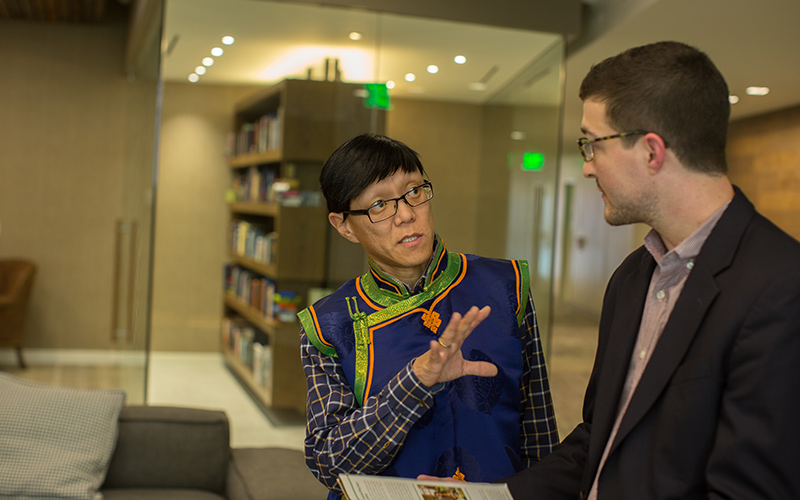 When Bayar Garam was growing up in Mongolia, he didn’t know a single Christian. Neither did anyone else in Mongolia. As a closed communist country, everything from religion to the press was controlled by the Mongolian government. “We were exactly like North Korea is today,” explains Bayar.

That all changed in 1991—Bayar’s final year of high school. Communist reign in Mongolia ended and Christian missionaries entered the country for the first time in 70 years. “The number of Christians grew, literally from zero to 50,000-60,000 Christians today,” says Bayar. In 1992, Bayar became a Christian and attended the very first Christian church in Mongolia.

Despite the enormous advances of Christianity during the last 24 years, Bayar says there is still much work to be done. “A country with a young Christian Church needs a lot,” he says. At the top of Bayar’s wish list is a version of the Bible more accessible to the average Mongolian Christian. “We need another translation,” says Bayar.

That’s why Bayar is managing the production of a brand new Bible translation in Mongolia—the Mongolian Standard Version. This new translation will be translated directly from the original biblical languages of Hebrew and Greek into the Cyrillic script in Mongolia. As Bayar explains, “It will be a translation more clear, accurate and understandable for the readers.”

Bayar and his team of four translators are only just beginning the enormous task of translating the entire Bible into their heart language; he’s spent the last two years teaching Hebrew to his team. But during their training, Bayar’s team has experienced the spiritual fruit of engaging directly with the Bible’s original languages. “It’s like all the time you were watching TV in black and white. But now you watch it in color. You now see different color shades and nuances,” says Bayar.

Although the finish line is 12 years away, Bayar feels well supported as he heads up this monumental project. “When American Bible Society says, ‘We are behind you financially and will be praying for you,’ that takes a huge burden off of me,” he says.

And while the road ahead is long, Bayar can hardly wait to see how God will use the Mongolian Standard Version to transform lives in his home country. “We will have a good tool for evangelism,” he says. “I really hope that this translation will be a good tool for Christians, as well as unbelievers, to understand the Bible and the Gospel.”