Abducted by ISIS, One Christian Made an Impossible Choice

Bible Societies globally are binding up the spiritual wounds of persecuted Christians in the Middle East. 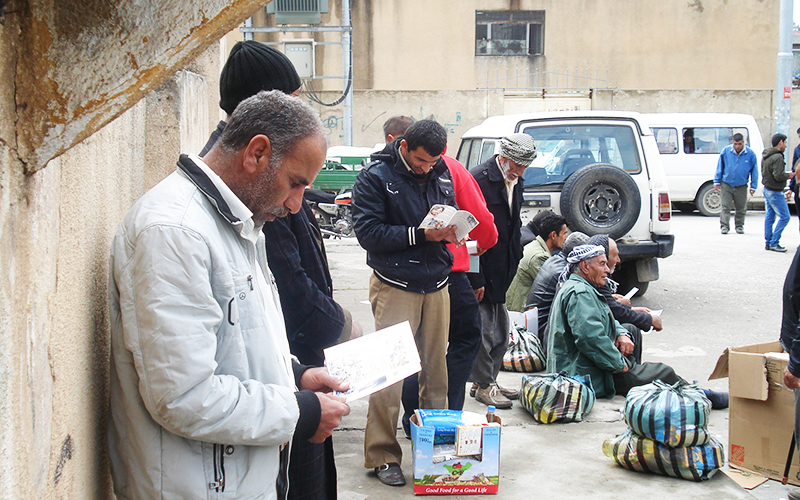 The typical Iraqi Christian has, over the last 30 years, been displaced four or five times,” says General Secretary of the Bible Society in Lebanon Michael Bassous. “Many of them will never be able to leave Iraq, for financial reasons.

As a Christian living in Iraq, Kasim* has faced his fair share of impossible choices. When ISIS militants raided his village, Kasim had to make a decision. Would he evacuate the town along with his wife and children? Or would he remain behind to defend their home from the violent band of terrorists?

Kasim* decided to defend his family’s home, a decision that came with traumatic consequences. The ISIS militants abducted Kasim along with 30 other men. The captives were hauled away to a prison compound and all 30 men were crammed into a single cell.

Kasim* decided to defend his family’s home, a decision that came with traumatic consequences. The ISIS militants abducted Kasim along with 30 other men.

One month later, Kasim was still in the cell, longing for his family. Incredibly, his captors had not yet physically tortured him. But the psychological torture was painful enough. Kasim could hear ISIS soldiers torturing his fellow prisoners in adjacent cells. He became aware of several female prisoners in a room close by; eventually they simply disappeared.

After more than a month as a prisoner, Kasim’s captors presented him with another impossible choice: They would allow him to return to his family as long as he signed a statement that said he had converted to Islam. As a Christian, the choice agonized Kasim; the ISIS soldiers hounded him with deep psychological pressure. Eventually, Kasim chose to be with his family again and signed the piece of paper.

“Now how do you deal with that?” wonders General Secretary of the Bible Society in Lebanon Dr. Michael Bassous. Dr. Bassous heard Kasim’s story first-hand when he met his family in a camp full of Iraqi refugees. “Some people would say he did the wrong thing but we’re not here to judge—we are here to help him and his family overcome this trauma, including the decision that he made in order to see his family again.”

Every single Iraqi Christian family has a story—a sad one.

Dr. Bassous and other Bible Society leaders from the Middle East took time to pray over a weary looking Kasim. “In my heart, I’m a Christian,” he told them, still haunted by his choice to escape the ISIS prison. Before they departed, Dr. Bassous and his colleagues left Kasim with a special gift: a Bible from supporters around the world, including American Bible Society.

Dr. Bassous and Bible Societies in the Middle East are nourishing Christians with God’s Word, ensuring that survivors like Kasim don’t face their spiritual wounds alone.

“Every single Iraqi Christian family has a story—a sad one,” says Dr. Bassous, reflecting on the dire need of suffering believers in Iraq. With support from faithful financial partners around the world, Dr. Bassous and Bible Societies in the Middle East are nourishing Christians in the Middle East with God’s Word, ensuring that survivors like Kasim don’t face their spiritual wounds alone.

*Names have been changed to protect the identity of our beneficiaries in Iraq.

You are my hiding place; you will save me from trouble. Psalm 32:7