Strengthening the next generation of believers in Ethiopia 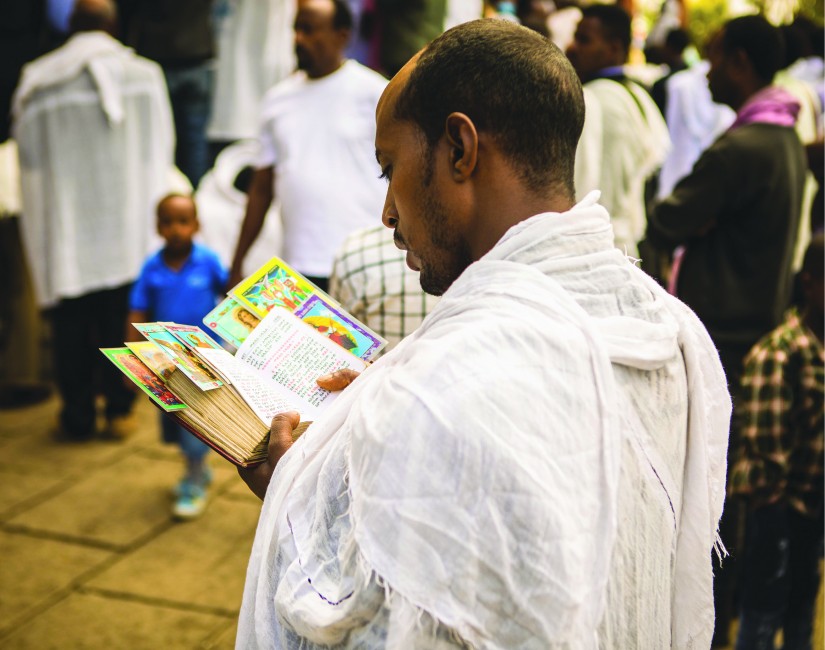 holy readings. But whoever wrote the encyclopedia has never walked the streets of Addis Ababa in the early morning, hearing ancient psalms reverberating off the half-finished walls of the city. They’ve never sat with a father reverently reading a Ge’ez manuscript to his family—teaching his children about God’s undeniable role in their culture and their lives. They’ve never entered the courtyard of Saint Gabriel’s Church and bowed with hundreds of others to the words of God spoken in a language that predates Jesus’s time on earth.

YOU ARE PRESERVING CHRISTIANITY IN ETHIOPIA

Ge’ez is so much more than a lifeless, academic language. Ge’ez is the very heartbeat of Christianity in Ethiopia. That’s why it is so significant that you helped translate the New Testament into Ge’ez last year. You are helping preserve the faith of a country for generations to come. “Donors who support this project are maintaining Christianity in our country,” says General Secretary of Bible Society of Ethiopia Yilma Gethahun. Which is really saying something. Surrounded by Muslim nations, Ethiopia has endured as one of the oldest, if not the oldest, Christian nations on the planet. Some trace the roots of Christianity in the country all the way back to the Ethiopian eunuch referenced in Acts 8:26–40.

AN ANCIENT TEXT HAS NEW LIFE

The Ge’ez Scriptures have an impressive ancestry of their own. Ge’ez Scripture manuscripts dating back to the fifth century exist in fragments across the country. To engage with these

Scriptures, Ethiopian churches use everything from unwieldy books that cover half a desk to incomplete Scripture portions handwritten on parchments or animal skins. In short, the church has struggled to find unity around a single, accessible Bible translation.

That all changed through your generous support. Church scholars from across Ethiopia came together last year to compile these manuscripts—reconciling the differences and creating one cohesive New Testament text. And translators are already hard at work on the Old Testament.

NOW EVERYONE HAS A BIBLE THEY CAN READ

With this new publication, the ancient truths of God have become accessible to the broader Christian community. “The portions of Ge’ez Scriptures that existed were only used by priests, and the faithful could only listen to them reading from the Word,” explains Endrias Kacharo of the Bible Society of Ethiopia. “With the publication of this New Testament, the Ge’ez Scriptures have become accessible to all.”

Church leaders in Ethiopia are keen to use the Ge’ez New Testament to nurture the next generation in their knowledge of Ge’ez and God. “It is now our mandate to protect and preserve [our] Christian heritage and pass it on to the generations,” says Bishop Aregawi, leader of the dioceses in Southern Gondar.

THANK YOU FOR MAKING A DIFFERENCE!

Thank you for supporting this critical work. Because of you, a “dead” language is bringing the living hope of Jesus to a new generation in Africa.