Responding to the Bible’s Call

Cyclist ride hundreds of miles for the Women in Congo

Online ExclusiveAfrica & In The USA 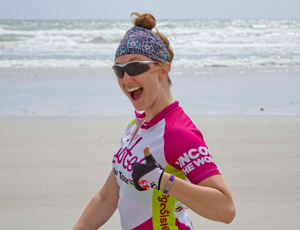 Amanda Olsavsky Hu, coordinator of the She’s My Sister™ bike tours, gets ready to ride 558 miles for her sisters in Congo. Photo by Chris Pochiba.

In the height of summer, cyclists braved heat, rain, emotional exhaustion and physical fatigue as they rode for the women and children in the Democratic Republic of the Congo in American Bible Society’s She’s My Sister™ bike tours.

This annual ABS event, now in its third consecutive year, was begun to create awareness about the plight of orphans and widows in the DRC, hundreds of thousands of whom have been raped in an ongoing, 16-year war.

For many cyclists, the tours gave them the opportunity to take action against such injustice. But as the 18 riders battled one grueling day after another, their perspective changed. What started as a cause for social justice transformed into a response to the Bible’s call.

Amanda Olsavsky Hu, coordinator of the bike tours, explains. “Over the last three years, I’ve watched different young men and women begin the bike tour with a sense of ‘Something needs to be done’ and ‘I can be that [person to] change [things].’”

But as the cyclists jointly studied the Scripture Journey, He Has Sent Me, they began to see a new perspective—that of biblical justice. “They see how restoration happens when God’s Word is allowed to change and heal. … And because they’ve engaged with God’s Word, they are now coming alongside ABS in bringing the same hope where it’s so desperately needed.”

This year, riders had the option to participate in one of two tours: the Southeast tour, which covered eight cities and boasted 10 riders; and the Great Lakes tour, in which eight cyclists visited seven cities. Each lasted two weeks, shorter than previous years’ events.

ABS chose to break the tours in two so more people could participate. In the Great Lakes circuit, for example, several cyclists in their 40s and 50s rode the requisite 356 miles along with college graduates.

The Southeast tour saw nearly the same diversity in age and walks of life. One woman was a therapist in her mid-30s; she rode 558 miles along with a 21-year-old college student.

This diversity made an impression on Kelsey Karys, 22, a recent graduate of Cornell University.

“I appreciate older and wiser Christians who can look into my generation and see the hope in us,” says Karys. “Leaders [see] that we are carrying on the torch—that we really do have valid ideas and things to say.”

Along their route, both groups made presentations to congregations. In this way, the riders directly connected the stories of the Congo women to listeners. Often, everyone would worship together.

At one Congolese emigre church in Milwaukee, cyclist after cyclist shared why they were riding for the women in Congo. The pastor, visibly moved, said, “‘Thank you for giving up your time to do this for us. We appreciate that you’ve done this for us. We will never forget you.’”

To learn more about ABS’ She’s My Sister ministry, go to sister.americanbible.org

God's Word in Action: Responding to Hurricanes Gustav and Ike