One little Bible in the hands of a Christian soldier can win major victories for the Kingdom of God. And it’s all thanks to your generous support of our brave Troops. 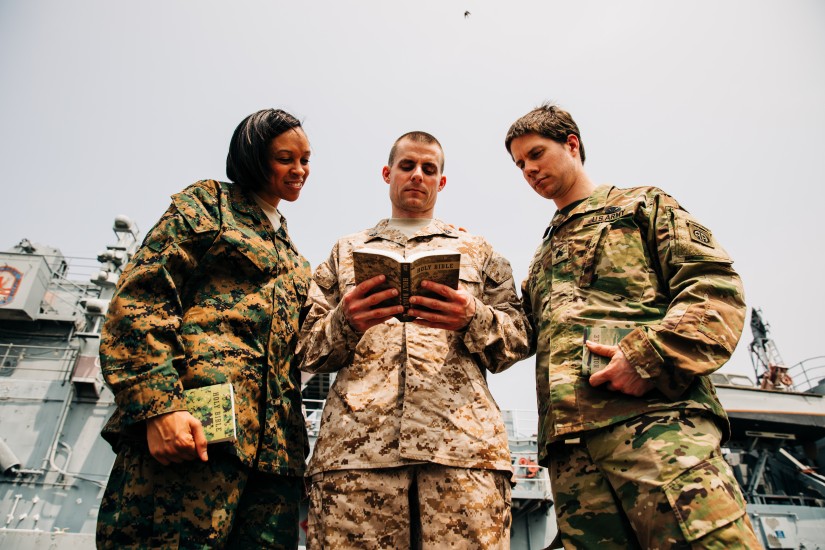 Basic Combat Training in not easy.

In fact, the 10 weeks may be the toughest thing the Soldiers will accomplish during their lives.

Trainees going through BCT will undergo physical and mental transformations ...

They will face their fears as they learn to work as a team.

They will become emotionally, mentally, and morally resilient ...

They will become American Soldiers.

Thus reads a portion of the disclaimer posted on the website of U.S. Army Fort Jackson in South Carolina, where a young Christian soldier named Tommy Doles completed his Basic Combat Training.

According to Tommy, that disclaimer is 100 percent correct.

“One night field exercise called ‘The Hammer’ was the longest, coldest night of my life—easily,” Tommy says. “It was freezing rain the entire time.” (Now might be a good time to mention that Tommy is also a volunteer firefighter and a former NFL player. Doing ridiculously hard things is not exactly an unusual experience for him.)

But despite the outrageous mental and physical toll of Basic Combat Training, Tommy confesses that one part was surprisingly easy: sharing the gospel of Jesus Christ.

The U.S. Military is a Mission Field

“Basic Combat Training is a very spiritually open environment,” Tommy says. “Walking around the bay, stopping by people’s bunks, it was almost too easy to start a spiritual conversation. If I just mentioned that I was a Christian, guys would say, ‘Tell me about that!’”

Tommy believes there are several reasons why the tough environment of Basic Combat Training is fertile ground for evangelism. At the top of the list? God’s Word has a powerful presence in the U.S. Military thanks to your generous provision of Military Bibles through American Bible Society’s Armed Services Ministry. And Tommy has witnessed firsthand how those critical Bibles are changing lives.

“Chaplains have all of these free spiritual resources available on their tables,” Tommy explains. “Guys will grab Bibles just because it’s something that’s free. They’ll take it and start flipping through it. I’d ask them, ‘What are you reading? What are you finding? Let me tell you what I believe!’”

Although Tommy had lots of practice doing evangelism as a college and professional athlete, he claims that it was the presence of a physical Bible, not his own persuasive skills, that created

“Without a Bible that we could look at together, guys would just think, ‘Who is this guy trying to tell me what to believe? Why should I trust him?’” Tommy says. “The Bible gives us a firm foundation beyond the opinions of a fallible human. It gives us the true Word of God.”

Your Gift of Bibles is Reaching Lost Souls

Although chaplains provide Bibles to Military trainees free of charge, it might seem incredible in this day and age that a group of young people would voluntarily read the Bible in their spare time. But Tommy explains that Basic Combat Training is hardly an ordinary cultural environment.

“There’s a total lack of distraction. You don’t even have your phone!” he explains. “During Basic Training, you can either have study materials or religious texts. People looking for something to read and do would take those Bibles that the chaplains hand out and actually read them. Those resources are not wasted!”

In addition to the absence of addictive screens, Basic Combat Training is often the first time that a group of strong, healthy, young people are confronted with their own mortality and the looming reality of an afterlife.

“You’re in a setting where you’re thinking about mortality all the time,” Tommy says. “You’re thinking, ‘I could die. Death is a very real possibility.’”

Surrounded by people contemplating their eternal destinies, Tommy felt a conviction stirring deep in his soul—a conviction shared by faithful evangelists like you:

“If I really care about these people, then I need to share the greatest news that there is to share!”

Curious Soldiers are Coming to Jesus

Armed with this conviction and with the Bible that you gave him, Tommy led several people to Christ during his Basic Combat Training. One of the young men had been reading a Buddhist text when Tommy asked him a simple question: “Do you want to hear what the central message of Christianity is?”

They read John 3:16 together, and after a few conversations, Tommy asked, “Do you think you might want to make a decision to follow Jesus as your Savior?” After taking a few days to think about it, the young man came back to Tommy.

“Yeah, man,” he exclaimed. “I want to do it!” They prayed together, and he accepted Jesus into his life.

“I felt like I had a front row seat to see someone’s life changed!” Tommy says. “It was totally the Holy Spirit changing this guy’s heart. Eventually, I heard him talking about his faith with other people.”

Soon, Tommy was leading whispered Bible studies and hymn-sings after lights out. (“Not too loud, or the drill sergeant would come in and scream at us!” he laughs.) What started out with two or three believers grew to nearly a dozen guys worshipping Jesus by the warm red glow of their headlamps.

“The number of people I saw converted in such a short amount of time reminded me of the early church in the book of Acts,” Tommy says. “It was a good reminder that the Word of God is living and active! It’s powerful and it changes hearts.”

Tommy wants you to know just how thankful he is to you for sharing God’s life-changing Word in the fertile mission field of the U.S. Military.

“Thank you for your generosity and faithfulness. Your gifts make a real impact,” Tommy says. “This really is a high-yield place to give. I’ve seen firsthand what happens after you give— and it’s amazing.”

Along with his deep gratitude, Tommy sends you a humble request: Please keep giving and please keep praying.

“Please pray that the Bibles you give would lead to doors open for the gospel to be shared,” he asks. “Think of it as a business plan: Let’s get the Word of God out into these places. Let’s cover it in prayer. And let’s trust that God is going to make things happen!”

Get life-changing Bibles into the hands of more brave troops like Tommy! Give.Bible/Military

Caring for our Nation's Veterans

Updates on American Bible Society ministry from across the U.S.