Branching Out to America's Military

God's Word from the Front Lines to the Home Front

RecordHope & In The USA & Military 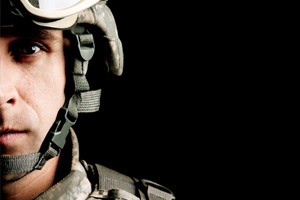 “Before I went to basic training I didn't read the Bible or believe in God,” writes PVT Michael McIntyre. But it didn't take long for the typical trials of military service to strike home.

After his first three weeks at boot camp, Michael's girlfriend phoned him to end their relationship. Heartbroken, Michael instinctively sought out a Bible. He read Psalm 13, where the Psalmist laments feelings of abandonment similar to ones the young soldier was feeling — the words spoke to his pained heart.

By the time the Private got to Psalm 91, he was embracing as his shield a God whose existence he had previously doubted — he believed God was with him; the Word of God had given his life new meaning.

Michael's conversion wasn't the terrifying, foxhole kind. Rather, his experience points to the more mundane, if incessant and unsettling pressures of military life — a life of never-ending transition and instability.

It is for men and women like Michael, both active duty and veterans, that American Bible Society seeks to provide life-changing tools built around God's Word.

He knows; he attended Army ROTC and was commissioned as an Air Defense Artillery officer in 1978. While stationed at Fort Riley, Kan., the young line officer joined a Bible study led by Chaplain Bob Collins. True to the theme of their study in 1 John, “That small group loved me,” recalls Jim.

Alone on his daily run one morning, contemplating what he'd been learning in his study — the claims that Jesus made — his offer of new life, Jim came to a decision. He returned to his battalion with new purpose — with his mind and heart set in a new direction. He sought ways to share his new Christian convictions. He says, “At the chapel I started teaching a Bible class to third graders.” He summarizes, “I felt like David confronting Goliath.”

In 1988, Jim Puchy returned to the Army as a Chaplain to confront, head-on, the stress and instability he saw in the lives of his fellow Soldiers.

Reaching a Church of Families in Uniform

“Our military represents a huge mission field; it's a group we should care about,” says the retired Colonel. “When we think of our armed service personnel, what comes to mind first are the nearly 2 million Soldiers, Sailors, Air Force personnel and Marines deployed on active duty. But for each of these there are their husbands and wives, sons and daughters, fathers and mothers, grandparents and other relatives. Add to that more than 24 million Veterans and you have a people group of more than 100 million; that's a third of our nation.”

The E100 Bible gives our Nation's Soldiers, Sailors, Air Force personnel, and Marines a starting point and provides a pathway to read God's Word. A 1,100 page Bible can be intimidating to someone unfamiliar with it. To make God's Word more accessible, E100 highlights 50 Scriptures in both the Old and New Testaments that lead a reader through the Bible's story, from beginning to end, pointing to the key passages that will unlock its transforming message.

The E100 kit includes study guides, a CD with sermon outlines and discussion tips. “We just completed a 20-week series of sermons based on the E100 for Families program,” says Command Chaplain Jack Van Dyken of the Army's Pacific Command. “We gave families in each congregation a list of Bible readings and discussion questions around which to build a time of family devotions. Pastors preached on a reading from the list each week, using the sermon outlines provided on the E100 cd.

Participating families found the time together reading and discussing the Bible transformational; it was a first-time experience for many. Most families stuck with it; going through the whole program. Previous attempts to read the Bible daily would start off strong but then fizzle midway through.”

Thanks to donor generosity, the Bible Society has been able to provide active duty and VA chaplains with more than 5,000 E100 Kits and more than 150,000 E100 planners.

Engage Your Strengths EYS) is a team-building and talent maximizing tool ABS designed for chaplains and their assistants; it blends Gallup's StrengthsFinder™ assessment and coaching with biblical foundations.

More than 26 percent of troops will return with mental health issues. Learn how to help.| Read Now »

“A central tenet of most leadership theories is the need for leaders to know themselves,” says Col. Kenneth W. Bush, a Chaplain instructor at the U.S. Army Chaplain Center and School. “To enable future supervisory chaplains to gain this self-knowledge, we introduced the EYS tool into our courses.”

Chaplain Bush adds, “The insights gained through Engage Your Strengths have been an important tool for both team development and the personal leadership development of our Chaplains and Chaplain Assistants. We are thankful for the vision and partnership of ABS and Gallup.”

The Bible Society has provided more than 10,000 of these EYS assessment tools since its inception last year.

God Understands (GU) is a program that was created to equip VA chaplains in their ministering and counseling sessions with Veterans and their families. The Bible Society approached the VA National Chaplain Center with a desire to develop a resource that would provide healing, hope and comfort to Veterans dealing with post-traumatic stress disorder (PTSD) and the spiritual, physical and emotional brokenness brought on by active duty service. As a result, a series of themed booklets, each focusing on one of the eight spiritual injuries from the spiritual Injury scale used by VA chaplains, was written.

These spiritual injuries include anger, grief, doubt, guilt, fear of death, a sense that life is unfair, hopelessness and meaninglessness. The booklets include real life situations about Veterans and are used to introduce the topic and various scriptures that speak directly to the theme of the booklet. There are three to five chapters in each booklet. Within each chapter Hebrew/Old Testament passages, New Testament passages, thought-provoking reflection questions, suggestions for exercises and a prayer appear at the end of each chapter. Each booklet opens with a Reading Suggestion Scripture Card.

One of the Chaplain authors, Juliana Lesher, writes, “Our Armed Service Members, Veterans and their families are acquainted with traumas, doubts, griefs and painful experiences for which there is no rational explanation. When I learned of American Bible Society's desire to produce the God Understands series, I recognized how valuable such a publication would be for our Veteran patients.” The God Understands series has become a significant resource among military chaplains as well as VA chaplains and is available online and in audio versions.

In the last three years, the Bible Society has delivered more than a half-million of the God Understands series to military chaplains and chaplains at VA hospitals.

Retired Navy Chaplain Charles Hall, now serving as a VA chaplain at the VA's Brooklyn Medical Center, says he has seen first hand how the God Understands series has helped patients communicate with God about their issues. “It helps our Vets bring their feelings to the surface — express feelings such as worthlessness and shame and guide them to constructive and healthy responses.”

Chaplains express gratitude to American Bible Society and its donors for their ongoing ministry. “The soldiers that I serve,” says chaplain Robert T. Carter, Jr., “the Veterans that I meet at community events, all benefit from the availability of the resources that American Bible Society provides for us. With the guidance of the Holy Spirit, I am brought to places in soldiers' lives where they are ready and eager to hear the words that have been given to us by God.”

Pray that God will continue to use these tailored resources to speak to those within the ranks who seek to hear his voice.

Make This A Christmas Like No Other For America’s Armed Forces!

Bringing the Bible to Life

Jesus walks among the people. Photos courtesy of History Channel.Bringing the Bible to life...