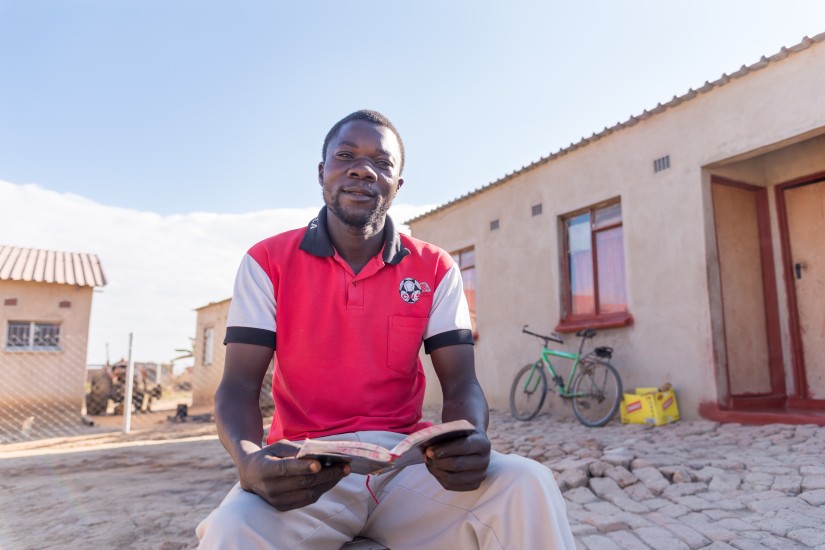 Zimbabwe is a country in need—and that was before COVID-19. In addition to suffering from one of the worst droughts in decades, which has left half the population at risk of hunger, Zimbabwe is in the grip of a deep economic crisis. Only around 5-10 percent of the population is officially employed, leaving most Zimbabweans to scrape a living as street vendors or subsistence farmers.

But hope is rising in this southern African country. Thanks to your prayers and support, a new Bible translation in the language of Chikunda is due for completion in 2023—and seeing this finish line fills this people group with excitement and endurance.

“I would like to thank the donors who are involved with the Chikunda translation,” says Tendai Khatiza, 32, pictured below reading his Chikunda New Testament outside his house. Tendai is eagerly awaiting the very first full Chikunda Bible.

“I will read the Bible fully and no one will need to interpret,” Tendai says. “I am going to understand the Bible myself because it’s in my own language. So I am very happy!”

Zimbabwe by the Numbers

One Widow in Rwanda Rebuilt her Life on God’s Word

After losing her husband in the 1994 genocide, a woman in Rwanda found hope for her life through the Bible.