Counting It All Joy 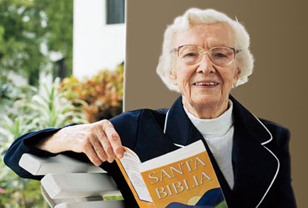 Each month, a determined 88-year-old takes the bus to a nearby shopping mall, praying that the Lord will direct her to a Spanish speaker.

Sometimes, the fluent Spanish that pours out of the mouth of this radiant gringo puzzles those she greets. For 53 years, Marie Rojas and her late husband, the Rev. Andrew, ministered in Spanish, first along the Texas-Mexico border and then in Mexico.

Marie and Andrew met at Asbury College in Wilmore, Ky., and after marrying in 1945, trained as missionaries with the Salvation Army. Although they felt called to Mexico, difficulty getting visas caused them to reach out to migrant workers on the United States side of the border.

At about seven o'clock each evening, as workers came in from the fields and gathered around campfires to cook their rice, beans and tortillas, the couple would lead them in singing hymns, Marie playing her accordion and Andy his guitar or cornet. On Sundays they went from farm to farm, conducting worship services. Marie says it was “nothing dramatic,” but little congregations were forming, and at each service, six or seven would commit their lives to Jesus.

“I look back now and marvel at what God was doing,” Marie says. “We followed the Lord's leading to be among them, to learn from them.”

For the many small congregations they established, Marie and Andy needed Bibles — Bibles provided by the American Bible Society. The couple was able to distribute more than a million during their 35-year ministry.

To follow up with converts from southern Mexico, Andy would travel a thousand miles to Oaxaca while Marie stayed back near the border, teaching, distributing donated vitamins and used clothing and, on occasion, going into the field to deliver a baby. She also launched Operation Scarlet, a six-year evangelization effort in the red-light district of Reynosa, Mexico.

Before Andy left to be with the Lord, he and Marie both protected and put to work money their families had provided by establishing a charitable gift annuity with the Bible Society.

Through this gift annuity, Marie shares Bibles not only at the nearby shopping mall but also around the world, in hundreds of languages. Through her gift annuity, she has money to live on while extending her ministry through the Bible Society.

After this story was published, the American Bible Society received a very special gift from the Spiritual Life Committee of the Covenant Village of Florida, in Plantation, in honor of Marie Rojas for her and her husband’s many years of Scripture distribution and missionary work in Mexico and along the Texas border.

We Are Here to Help

6 Million Bibles in One Year

Brazil’s Bible Society printed a record number of Bibles in 2009. Photo by ThrowingLight.comThe...