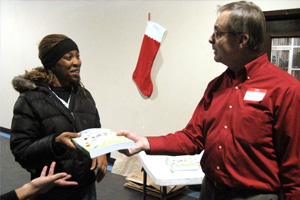 Family Bibles from American Bible Society were given out following a Dec. 14 dinner at City of Refuge, Atlanta, Georgia.

Dorothy Reece is no stranger to violence. For 6 years her boyfriend abused her. Late night arguments would turn into beatings and Dorothy would be forced to leave her house. But her boyfriend always found her and for fear of his aggression, she always returned. “It made him so angry and I didn't want him to get violent,” she says of the decision.

Her life was one of fear—fear of the father of her children, fear of the man she used to love. She would pray to God, but never heard an answer. Blaming God for her daily abuse, she became angry with him, “I thought this was God's punishment for me and that it was all his fault.”

After countless prayers and demands for God to release her from her life of cruelty, Dorothy realized that she had forgotten to listen. It was not until a particularly nasty night of arguing that she finally allowed God to speak back to her. At 2 a.m., Dorothy's boyfriend kicked her out of their house and she found herself on the curb with her children and nowhere to go. Before her was the God-given opportunity to leave, and she was not going to pass it up.

Checking into a local homeless shelter, Dorothy learned of Eden Village, a ministry partner with American Bible Society, in Atlanta, Georgia. Eden Village is a ministry of City of Refuge, a partner of the Bible Society's Bread Today™ Program, designed to provide the life-changing message of God's Word to the food-insecure and impoverished. They offer comprehensive care to the homeless and victims of domestic violence for up to 120 days. Here, battered and hopeless women recharge and regain a grasp on their lives. Residents receive access to hotel-style rooms, on-site daycare, substance abuse and mental health treatment, job skills training and transition into permanent housing.

Upon arriving at Eden Village, Dorothy found refuge and all of the tools she needed to heal and grow. Resident-run Bible studies and prayer groups became a regular part of her day and she was committed to starting a new life of devotion to the Lord. Speaking of the newfound trust in her Savior she says: “I don't have anything else. I have to be here and the Word of God humbles and strengthens me and gives me patience.” Day by day, Dorothy learns to trust God with her whole heart, attending support groups and devoting herself to a life of prayer.

By being diligent in her commitment to prayer and the Word, Dorothy has learned another valuable habit: finding joy in the small blessings that God bestows on her. “I have to thank God for my children, that we are safe, that I have a roof over my head,” she says. When left with nothing and nowhere to go, this practice can only come from reliance on the promises of God, “it's just like getting dressed in the morning, something you have to do every day.”

Not only has Dorothy found refuge and strength in the Word of God and the provision of Eden Village, she now ministers to other broken women. Her advice: “Don't give up, always think toward the future, pray continually.”

Dorothy's life of abuse, violence and pain is being transformed into one of love, safety and trust in her Lord. Her hopelessness was exchanged for promise, her pain for joy.

Provisions have now been made for her to transition to a permanent residence with her children as she seeks employment and new opportunities. Dorothy came to Eden Village a broken, hopeless victim and will leave a devoted and empowered woman of God.

5 Top findings from new study on Hispanics in America