From Nightmare to a Dream Come True 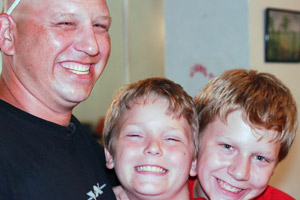 Rob Heck with two of his sons.

When Rob Heck heard a knock on his door last April, he had no idea it would be the best and worst night of his life. Times are tough throughout the United States, particularly in the Appalachia region, and Rob and his wife Brenda had been out of work for a while.

So when they were told at 9 p.m. that they and their three sons were being evicted and had to be out of their home at midnight, they were distressed and had nowhere to turn.

That’s when Rob’s cousin told them about the Appalachian Dream Center. Located in an old mining building located in Logan, W.Va., the Dream Center serves around 80 hot meals a day and is a temporary shelter for individuals and families who are in danger or displaced. With the help of American Bible Society and Operation Compassion, the Dream Center seeks to meet the physical and spiritual needs of those hurting in the region.

When Rob and Brenda arrived at the Dream Center, they struggled to make sense of the level of compassion others were showing them. As non-Christians, they couldn’t understand why complete strangers would do so much for them and show them such unconditional love.

They were so surprised, in fact, that Rob agreed to go to church when a friend they met at the Dream Center invited them. Brenda was stunned. She never thought Rob would agree to that. She was even more stunned later that night when she found herself following Rob and her three sons up to the altar where they all dedicated their lives to Christ.

“It was the most amazing experience of my life when I asked God to come into my life, and I asked forgiveness for my sins,” Brenda said. “[It was] the way it was supposed to be.”

They were invited to be the live-in caretakers of the Dream Center, and, in turn, they are helping maintain the center and further its mission.

In just three short days from that frightful night in April, God not only provided the Hecks with food and shelter, but he also showed them they have a greater purpose in life.

Video still by Eliu Cornielle.Eddie grew up without a father and survived multiple rapes...