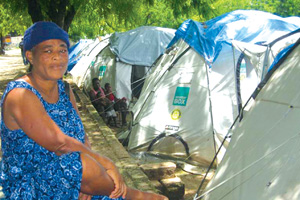 Mie Gisèle Roc sits by the tent that became her home after the earthquake.

Scripture: “. . . people need more than food to live — they need every word that the Lord has spoken.” Deuteronomy 8.3b (CEV)

On the afternoon of January 12, 52-year-old Haitian Mie Gisèle Roc was watching television at a friend's house. Suddenly, at 4:53 local time, the ground beneath the house pitched and heaved. Mie clung to the bedpost beside her as the ceiling and walls collapsed.

When the earthquake ended, Mie's four friends were dead, and she was buried beneath the remains of her friend's home. Slowly and laboriously, she burrowed through a tiny hole in the rubble to reach the outside world. She emerged alive,
but stripped of family, friends and the basic necessities of life.

Additionally, in partnership with the Haitian Bible Society and Water Missions International, ABS supplied a portion of the 132 water filtration systems that Water Missions International supplied to hospitals, schools, churches and communities throughout the country. These systems provided more than half
a million Haitians with access to clean water.

Now, more than six months after the earthquake, Haiti is at a crossroads. Many Haitians like Mie still live in makeshift huts with blue tarp roofs and mud floors. Some people, desperate to support their families, spend each day sifting through the rubble for items to sell on the streets. The government, which lost workers, buildings and resources in the earthquake, is struggling to rebuild the country's infrastructure.

A recent ministry assessment trip vconducted by Shamalia Snipe, a senior research analyst for Global Scripture Impact (GSI), the research arm of American Bible Society, found a staggering need for Scripture in the aftermath of the earthquake. As she visited Haitian churches and met with children, many people approached Snipe to ask for Bibles.

In the coming months, ABS will provide 25,000 Scriptures —10,000 in Creole and 15,000 in French — to Haiti. In the midst of the mud, debris and endless tarp shacks, God's Word will provide Haitians with a ray of hope.

As she rebuilds her life after the earthquake, Mie finds comfort in the Bible she received from the Haitian Bible Society. “More than ever, I am sure that only the Word of God can give comfort in such [a] situation,” Mie says. “I still believe that Jesus
has a plan for our country.”

After the earthquake, American Bible Society raised more than $680,000 in disaster relief for Haiti, the largest crisis response campaign in ABS history, thanks to our donors.

A student at el Bethel Yagma School in Burkina Faso is holding the illustrated Ma...

The Bible Brings Hope in Times of Crisis

A Nicaraguan mother trusts God with her daughter’s cancer.