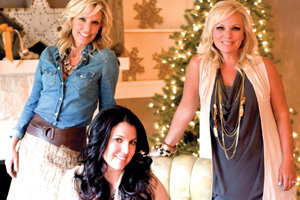 Shelley Breen, Leigh Cappillino and Denise Jones met while in college at Ouachita Baptist University in Arkadelphia, Ark. They decided to create Christian music together, and Point of Grace was born.

The latest album, Home for the Holidays, features well-known Christmas favorites, such as “Joy to the World,” and “Little Drummer Boy,” as well as new songs.

The concert series is designed to support ABS' initiatives to provide Bibles and Scripture materials to soldiers. It's a mission that fits perfectly with the women in the group.

“We are three women who have our faith, love of our country and are very family-oriented,” says Point of Grace singer Denise Jones. “We are so blessed to have the privilege of singing Christian music in our country, thanks to the men and women who have served and continue to serve for our freedom.”

Special Collection of Soldiers' Bibles on Display at MOBIA

4 Verses to Warm Your Heart in the Middle of Winter

God’s Word is a shelter for all seasons