Hope on the Front Lines 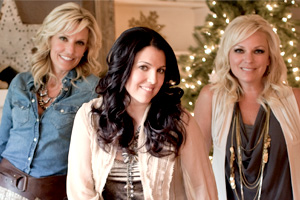 From left to right are Shelley Breen, Leigh Cappillino and Denise Jones of Point of Grace.

“A man's relationship with God tends to grow a lot closer during an experience like war. It is impossible to truly understand the incredible comfort and courage that a Bible brings during these trying times.”—First Lieutenant, U.S. Army Infantry Platoon Leader

On their travels to and from concert venues, the women of Point of Grace, a 10-time Dove Award-winning Christian group, often see planeloads of service men and women either going to war or coming back from conflict.

For singer Shelley Breen, seeing these men and woman conjures images of her own family. Her father served in Vietnam and her grandfathers fought in World War II.

“I have a special place in my heart for the men and women who serve our country,” says Breen. “My patriotism was passed down to me from the example my father and my grandfathers gave to me.”

So when Point of Grace learned that American Bible Society was looking for a partner for its artists' program, Breen was intrigued.

Point of Grace will perform 14 Christmas concerts to raise awareness and funds for ABS' Armed Services Ministry. ABS hopes concert attendees will learn about its commitment to the military and support efforts to provide Bibles and Scripture materials to soldiers.

“There is no greater gift than the Bible,” says Bob Hobbs, director, direct response at ABS. “Many of our soldiers are lonely and scared to death in places like Iraq and Afghanistan. God's Word is the only thing that's going to give them peace.”

ABS has a long-standing history of supporting our service men and women. For 193 years and through nine wars — including the Civil War, World Wars I and II, and the current war on terrorism — ABS has provided Scriptures to millions of men and women in the U.S. Armed Forces.

ABS hopes this concert series will encourage people to support the men and women who bravely fight for the freedoms we have today.

For information on how to support our Armed Services Ministry, please go to ASoldiersHope.com

Home for the Holidays Tour
Christian singing group Point of Grace is dedicating its Christmas tour to the men and women of the military and American Bible Society's Armed Services Ministry. | Join us »

A History of Serving Those Who Serve
For 193 years (1817-2010) and through nine wars, ABS has provided Scriptures to millions of men and women in the U.S. armed forces. | Learn More »

Reaching the children of American heroes with specially-designed Bibles

What’s the Most Bible-Minded City in America?

When it comes to U.S. cities that embrace the Bible, Knoxville, Tenn., tops the...