To provide aid to the millions of Syrians displaced by civil war, the Bible Societies of neighboring Lebanon, Turkey and Jordan have planned ministries to provide food and other deeply needed supplies—including Bibles and Scripture portions. 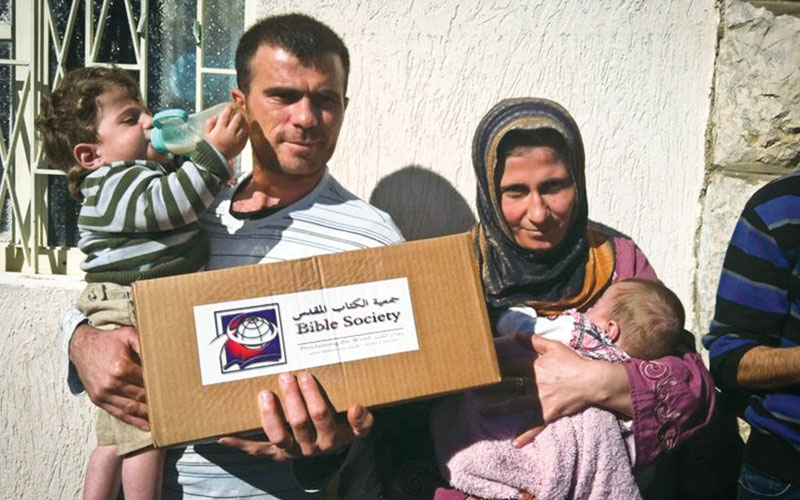 To provide aid to the millions of Syrians displaced by civil war, the Bible Societies of neighboring Lebanon, Turkey and Jordan have planned ministries to provide food and other deeply needed supplies—including Bibles and Scripture portions.

The number of refugees is expected to reach nearly 4.1 million by the end of 2014.

The Bible Society in Jordan, with support from American Bible Society, in partnership with 11 churches and 60 trained volunteers, is providing food and supplies to 500 families over a period of six months, reaching approximately of 2,500 Syrian refugees.

The Bible Society in Lebanon is planning to supply 6,000 Syrian refugee families with food, hygiene supplies and relevant Scripture Portions for children and adults as they seek to rebuild their lives and find hope in God.

The Bible Society in Turkey is partnering with a Catholic church in the large port city of Mersin to provide 100 families with education scholarships for their children and a year’s worth of food, coal and hygiene supplies.

The children of migrant workers in the Gulf develop a subculture that is different from their home background. With their parents at work, young people hang out in the malls and spend hours on their computers and smart phones. There is a great need to reach out to these young people with the message of the Gospel through a compelling project.

Recently, the Bible Society in the Gulf (BSG) supported the Youth for Christ organization on a two-day retreat for 300 youth from various churches from Bahrain and Kuwait. The retreat was called Desert Challenge, and the theme was Morphosis: The Change from Within. The BSG distributed CEV Youth Bibles at this event.

A participating youth leader noted, “I really like that all of the students in my youth group have the same Bible now. We used to have several different translations, which sometimes got pretty confusing. The language is simple to understand, which is great since some of the youth have different levels of English.”

Uganda continues to face daunting challenges resulting from insurgency in northern Uganda that forced one-third of the population from their homes to camps established for the displaced. Moreover, Uganda hosts an estimated 183,000 refugees from the Democratic Republic of the Congo, South Sudan, Somalia, Kenya, Burundi and Rwanda.

To aid in healing the emotional and spiritual wounds, the Bible Society of Uganda, in partnership with churches in four locations, offered a Bible-based trauma healing program, which included a Bible jamboree in the settlements. The project provided trauma healing and training that reached more than 10,000 people. A total of 230 people, including pastors, lay leaders, elders, community leaders and trauma survivors, each share the Bible-based message of hope and forgiveness with church members. In addition, 108 trained facilitators returned to their communities to provide Bible-based trauma healing in partnership with their churches and communities.

Because Mozambique is bordered by four countries, its people speak many different languages. An estimated, 700,000 people in Mozambique speak Xironga. However, the most current translation of the Xironga Bible was published in 1923, leaving the Ronga people to use texts written in another language to read, study or preach from the Bible. A translation project began in the 1970s, but civil war disrupted its progress.

The Bible Society of Mozambique (BSM), with support from American Bible Society, has continued its work translating the Xironga Bible. As a result, the Ronga community has a Bible. So far, BSM published 5,000 New Testaments with Psalms.

Dominican Republic:
Hope and Healing to Children with Clubfoot

Clubfoot is one of the most common birth defects among children, affecting more than 200,000 worldwide. In 2013, the CURE Dominican Republic Hospital reported 370 children born in that country with clubfoot who will require treatment to correct their limbs. The Dominican Republic Bible Society, with support from American Bible Society, has partnered with CURE International and 40 churches to meet the physical and spiritual needs of 100 children who were identified as having the greatest need. The project also sought to reach approximately 45,880 people with God’s Word, particularly those whose children were affected by physical disabilities.

Providing physical healing and spiritual hope, while tangibly demonstrating God’s love, will dramatically change the path of these children’s lives.

A Ray of Hope in Turkana

“We are going to teach generation after generation.”

Five years after receiving Bibles, these orphans are leading others to Christ!