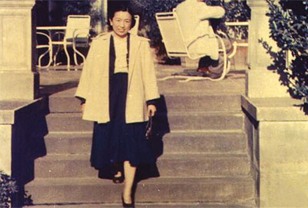 Katherine Hsu made contributions to pediatric medicine, and was a champion of the Bible cause. Photo courtesy of Katherine Hsu Foundation

This past September, at age 93, Katherine H.K. Hsu, MD, went home to the Lord. Yet she leaves behind a lifelong legacy of giving to others.

Born in Foochow, China, Katherine was the great-granddaughter of Leang Afa, the first Protestant missionary convert in China. Afa became China's first Protestant pastor and also printed its first Chinese Bible, carving each of the Chinese characters himself. That labor of love took 14 years to complete. By 1833, desperate for more Bibles and other Christian literature to sustain his small but growing faith community, Afa wrote to the American Bible Society seeking funds for Bible publication. The Bible Society responded with a grant of $5,000.

His great-granddaughter carried on Afa's spirit of outreach. Katherine's regard for all who suffer, especially children, inspired her to become a physician. She dreamed of developing a treatment to halt the spread of tuberculosis (TB), a disease that claimed the lives of a brother and a sister.

Graduating with honors from Peking Medical Union College, Katherine headed up pediatrics at the Children's Hospital in Shanghai. When the Japanese invaded in 1941, she fled to join her husband at a medical college in Jiangsi. After Victory in Japan Day in 1945 she moved to Canton to teach pediatrics at Ling Nam University Medical College.

A fellowship in pediatric research brought Katherine to the U.S. in 1948. Five years later, Baylor College of Medicine invited her to build a children's TB clinic and hospital. While there she developed an effective treatment for preventing TB in children, fulfilling her professional dream.

She wrote regarding her many contributions, “As I look back, I can see clearly how God has wonderfully engineered circumstances and led me step by step. . . . As the Scripture says, ‘We are His workmanship, created in Christ Jesus to do good work, which God prepared in advance for us to do.'”

Katherine's commitment to God's Word and her gratitude for helping the faithful in China get access to God's Word live on through her numerous American Bible Society Gift Annuities and other gifts. It also continues with the foundation that bears her name. Her generosity follows a long family tradition of opening the riches of God's Word to others.

”...God’s grace rules by means of righteousness, leading us to eternal life through Jesus Christ our Lord.” Romans 5.21b (GNT)

No Children’s Bibles in Kyrgyzstan?

“It was his first Bible.”