RecordAmity & Around The World & Asia & China 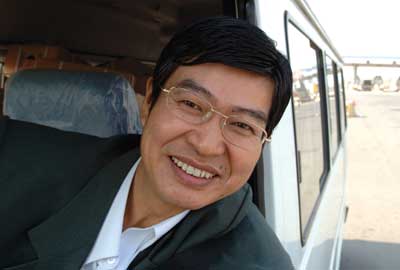 Pastoral overload. It’s quite possibly the dilemma of every pastor in the world today. There are always people to visit, budgets to balance and sermons to write. There never are enough hours in the day.

But what if you serve a flock made up of 10,000 members and you are its only ordained pastor? What if you are the only pastor on staff? And what if there is a great and unmet need for God’s Word?

According to Kua Wee Seng, that describes the church in much of China today. Wee Seng is coordinator of the United Bible Societies’ China Partnership and visited the American Bible Society (ABS) this past November.

“We are not talking about mega churches,” said Wee Seng. “The 10,000 plus members are spread out in many, many churches. You could have about 30 churches and one ordained pastor. In the province of Henan — one of the most populous provinces — the ratio is one [pastor] to 20,000 [members].”

The actual number of Christians in China can range from the official estimate of 20 million Protestants and 6 million Catholics to as many as 90 million from unofficial sources.

The shortage of pastors began with the Cultural Revolution, between 1966 and 1976, which virtually shut down the visible Church in China and forced Christians underground. In spite of the difficult circumstances, Christianity is growing rapidly in China today. However, the 20 seminaries and Bible colleges across the country have not graduated enough church leaders to meet the needs of the millions of Chinese Christians.

“Of course, with the growth of the Church comes challenges. There just are not enough pastors and preachers and trained leaders. And this is why it is important for us in the Bible Society to help equip them, first with the Bible, and then with help reading it, teaching it and preaching it. Otherwise, the Church is facing the danger of false teachings and cults, and will be weak and easily swayed to and fro by every doctrine.”

This void is hardest felt in rural areas like the Henan Province and its 100 million people. Henan has the largest percentage of Christians of all China’s 23 provinces, yet its three million believers are served by just 168 ordained clergy, 480 elders and 7,000 churches and meeting points. 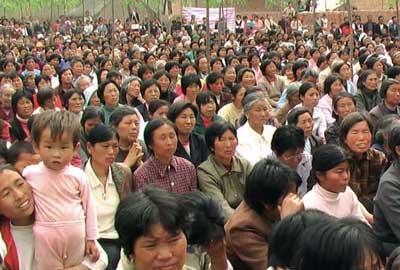 The crowd of 8,000 traveled to Jianzhuang village when they heard that Bibles were being distributed in Henan Province, China. Photo courtesy of China Partnership/UBS

How does one ordained pastor serve that many people? Siyumi Yanthrawaduge, a research analyst with Global Scripture Impact (the research arm of ABS) learned the answer firsthand when she toured Eastern China last spring. During her travels, she spoke with ordained pastors and volunteer lay leaders who stand in the gap.

“A pastor’s job (in Henan) is eight to ten times the amount of work than a pastor in Shanghai or any other major Chinese city,” says Siyumi. “Pastors are compelled to manage their congregation on a macro level. They perform mass-scale retreats and mass-scale Bible studies. Most of the pastors are trying to juggle an extensive list of responsibilities like shepherding, fundraising for expanding churches, preaching, lecturing at seminaries and training centers, performing sacraments at all churches under their authority at least once a month.

“Most congregations are lucky to see their pastor once a month,” she says. “The day-to-day shepherding is done by volunteer lay leaders — men and women who are most likely outside tilling their soil in this predominantly rural area until it is time to serve at the church.

“There are about 7,000 volunteer preachers in Henan Province who are looking after the everyday activities of the churches,” says Siyumi. “These individuals are not ordained clergy, but some are provided with training to preach, undertake basic financial management of church activities, coordinate worship in services and provide general leadership to congregations.” However, not all volunteers have training, and there still are official functions that require pastors to perform.

Seminary graduates return to their rural villages to serve, but village churches often do not have the resources to give the them a salary. The graduates are well equipped to serve in voluntary capacities, but they also need full-time jobs, most often farming, to support themselves. “In rural areas, people have difficulty providing for their basic needs, so how can they pay a pastor?” asks Siyumi.

The government registered churches — Protestant churches are served by the China Christian Council/Three Self Patriotic Movement (CCC/TSPM) and Catholic Churches by the Catholic Patriotic Association/Chinese Bishop’s Conference (CPCA/CBC) — recognize the need for more pastors and are taking steps to increase the institutional base for theological study in China. For example, a new campus for Nanjing Union Theological Seminary is now under construction in Jiangning District. This is a project approved and financially supported by the central government. “But with every new student, there is increased need for resources,” noted Siyumi, after touring Nanjing Seminary. 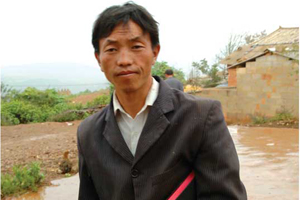 “In a district in Henan Province, students fresh out of seminary are offered about $115 a month, a cell phone and a motorcycle to serve their local churches,” says Bible Society researcher, Siyumi Yanthrawaduge. Photo by Dag Smemo

“One of the biggest challenges for the seminary students is language and appropriate resources not being available in Chinese. Some good theological texts have not been translated into Chinese, and this is a huge gap that students in seminaries face today. Thus, for the faster completion of programs at seminaries, students need more resources in Chinese,” Siyumi said.

“I speak Latin, German, Greek and English,” one female undergraduate student told Siyumi. “I want to be a pastor, a teacher and a translator. All these roles are severely lacking in the Christian Church in China. There are passionate students who are willing to take on these various roles in the future, but vital resources are lacking to support a well-rounded education for students at seminaries.”

The American Bible Society will continue to support the many facets of the Church in China. In addition to subsidies for paper on which Bibles are printed, vans are being equipped for delivery to rural areas.

Money has also been allocated to help supply resources for the two national seminaries, Catholic and Protestant.

Meet Kua Wee Seng, a passionate leader helping to get the message of God’s Word to Millions across China. Mr. Kua serves as the China Partnership Coordinator for the United Bible Societies (UBS), focusing on ministies across Mainland China. Beyond his work on the ground in china and as a board member of the Amity Printing Company, Mr. Kua is a trained biblical scholar and a leader within the church in Southeast Asia.

These two videos are short glimpses into lives that are being changed in growing Bible ministries across China.

“I also love to share the Gospel with my friends,” says 12-year-old Huyen.