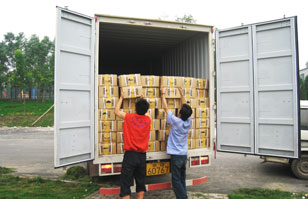 Unloading Bibles from the Amity Press. Photo by Liu Hongliang.

An estimated 2 million visitors came to Beijing in August, including 500,000 from abroad. Scriptures printed at the Amity Printing Company's new facility were ready for the occasion.

A special edition of the Chinese-English Four Gospel Portions included the official emblem of the Beijing Olympic Organizing Committee. Some 100,000 copies were printed at the new facility. It was the first time the Committee granted permission for the use of its emblem to a religious organization without charge.

The Beijing Olympic Organizing Committee set up places for worship within the Olympic Village; 10,000 copies of the Amity Press's Chinese-English Bible were delivered there for free distribution, as were 30,000 copies of a Chinese-English New Testament published by the China Catholic Church. Gospel Portions containing testimonies of Christian Chinese national soccer players were also published and distributed at various churches.

From the Brink of Death: Two Miracles in China

God saved Jian's Life. Now he and his mother are learning to read God's Word together.