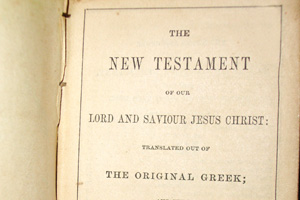 I have been in the process of doing some housecleaning chores — specifically cleaning out our basement. Among other things to be pitched were some magazines, but I decided to take a last look before doing so.

One was the Fall 2009 Record. As I thumbed through, I noticed an article I had missed dealing with a query regarding American Bible Society pocket Bibles given out during the Civil War. Being a history buff, I ripped it out and set it aside to read when I had a better moment.

When I sat down to read it, I immediately thought of a small pocket Bible that had belonged to my great-great-grandfather Willem DeYoung and decided to see if it might possibly be one of those distributed during the war. As I opened the worn cover, I was ecstatic to read the words “American Bible Society, 1863.” In addition, inscribed in pencil were the words: “Father carried this through the war.” 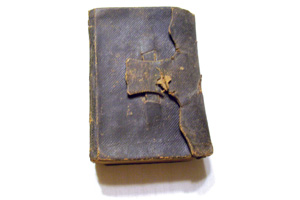 I am so grateful for the research American Bible Society has done, which has made this family treasure even more meaningful. It is wonderful to know this is one of the 5,297,832 Scriptures that gave troops some hope in an otherwise terrible war. It also brings to mind those who are now serving in the Middle East. Needless to say, the article has now joined the family treasure.