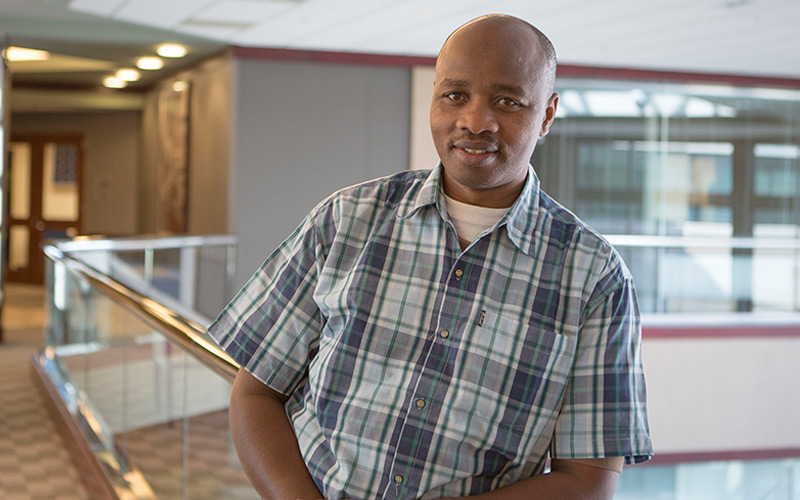 Justus Rubarema is a global advocate for Bible-based trauma healing in Uganda, but he says he grew up as “a village boy.” He and his seven siblings regularly attended church, which was more a social than spiritual activity. He longed for an education, so he left home at the age of 19 for Kampala. He lived on the streets for a while, then worked at a sugar cane plantation. Eventually, he approached school authorities and offered them a deal: He would exchange his labor on the school’s farm for an education.

“I managed to advance in education and get a job. That was the whole turning point. … I realized that the God of the Bible is a mighty God, and I completely realized that I had no hand in this. Who am I that I still breathe? This must be God who surrounded me with his protection and guided me,” he explains.

Today, Rubarema is an experienced minister and serves the Bible Society of Uganda as a program manager for Bible engagement, Scripture advocacy and Bible distribution projects. However, he got involved with trauma healing ministry almost by default.

After two of his colleagues attended the training but chose not to continue with the program, Rubarema decided to give it a try. “I must tell you, in my opinion, trauma healing as a ministry is not for everybody. It is a calling. … Personally, when I work with people and cry with them, I am encouraged. We have a God who loves us; there is still hope,” he explains.

Serving a “Big and Great” Need

The need for trauma healing work in Uganda is enormous.

After suffering through years of brutal civil unrest, many Ugandans are mending broken lives. In particular, fighting in Northern Uganda displaced more than a third of the population from their homes, forcing them to live in camps. Adding to the country’s challenges is the influx of an estimated 183,000 refugees, primarily from the Democratic Republic of the Congo (DRC), Sudan, Somalia, Kenya, Burundi and Rwanda. Thousands of people continue to enter Uganda as they flee rebel insurgency and militia wars in Eastern DRC.

“When [refugees] come to Uganda, communities begin conflicting with them because they may not be aware that these people have wounds in their hearts. They are looked at as invaders. … The church is the only platform where these people can come and have peace,” Rubarema says.

Focusing on those shattered by years of war and poverty, Scripture-based trauma healing through Bible Society of Uganda began in 2012, in conjunction with the five major local church denominations. So far, more than 10,000 people have engaged with God’s Word by attending trauma counseling sessions.

A total of 230 people, including pastors, lay leaders, elders, community leaders and trauma survivors, provided Bible-based trauma healing to church members, and 108 trained facilitators returned to their communities to provide healing programs in partnership with their churches and communities.

“Unless the church helps the spiritually wounded to have that hope that God is with us, it is difficult for them to believe God still loves them. … The need is big and great,” he notes.

Check out “By His Wounds We are Healed ” to learn more about how God mends hearts through Bible-based trauma healing.

God has done a mighty work

Ugandan Woman Waits 13 Years for the “Book of Life”