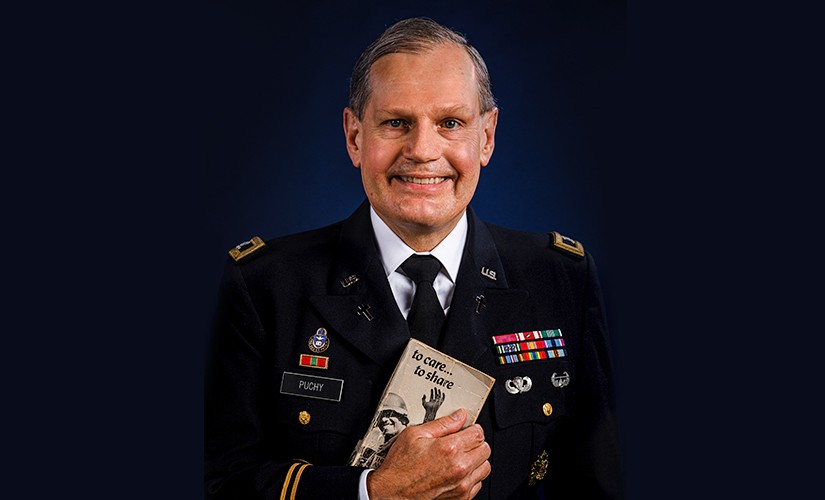 A young Army staff officer was out jogging with a lot on his mind . . .

Jim Puchy had recently attended a Bible study where he heard the Gospel for the first time.

“All that was working on my mind. Everything became real clear to me about who Jesus was,” he says. “I surrendered my life to Christ out there in my combat boots, fatigue pants, and T-shirt. I ran back to my battalion headquarters a changed man.”

Soon after, the second lieutenant received his first Bible from his Army chaplain, a military edition provided by American Bible Society.

“It had military related pictures and information, so it felt like it was designed right for me. It helped change my life,” he says.

That was 40 years ago. Today, the Rev. Dr. James Puchy, Chaplain (Colonel) U.S. Army-Retired, uses his rich military experience to lead the charge to place Bibles in the hands of millions of Troops just like himself. As American Bible Society’s Vice President of U.S. Ministry Integration, he partners with friends like you to share God’s hope with our American heroes.

Dr. Puchy says he never forgets what Scripture meant to him while serving. In over three decades of service, he was a battery commander, wrote war plans, served the Rangers as their chaplain during the invasion of Panama, and most recently served at the Pentagon.

“Our nation’s brave warriors face the possibility of death during each mission. They need the comfort, strength, and assurance that only comes from hearing from God in the Bible. You can help us meet this growing significant need by providing a Bible for every Sailor, Soldier, Marine, Airman, and Guardian who voluntarily puts themselves in harm’s way each day for our country,” Dr. Puchy says.

With your help, Dr. Puchy can continue working to share the same hope from God’s Word that he was given with other Troops and Veterans.

This Veterans Day, We Want Every Veteran to Know God Understands

Our Troops Meet the Ultimate Protector Through His Word

The Prayer Snapshot: 30 Days of Prayer with American Bible Society

Join our prayer challenge this January to pray for God’s Word to transform lives in 2022.