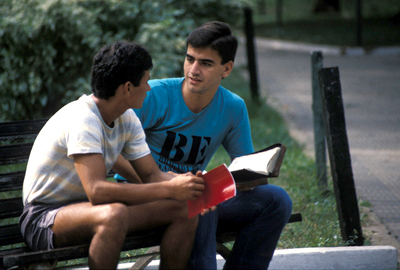 In 2008, youth read God’s Word at an event at Iglesia Artigas (Artigas Church) in Asunción, Paraguay.

The Next Generation program conducted by Sociedad Bi­blica Paraguaya (SBP, Paraguayan Bible Society) is presenting the gospel to urban youth in the Central, San Pedro and Alto Parana regions of Paraguay, offering them the opportunity to experience God’s Word and acquire a biblical foundation to guide their actions. The project also equips Christian youth with the spiritual resources they need to be agents of change in their country and give local churches materials.

According to the World Bank’s country social analysis of Paraguay, the large youth population in Paraguay poses risks as well as opportunities for poverty reduction and sustainable development. It argues that:

“This segment of the population is liable to make a significant generational impact in the years to come — in politics, society and the economy. Today, because of their upbringing in the context of political and personal freedoms, they tend to be much more outspoken and independent than earlier generations. With creative ideas, good leadership, and adequate resources, the Paraguayan youth could offer a great source of social energy and idealist commitment to initiate and sustain a whole range of anti-poverty activities.”

In order to be effective agents of change, Paraguayan youth need God’s Word and discipleship training materials to prepare them for leadership in all spheres of life. Training will also equip them to make biblically based decisions as they strive to achieve their full potential without being bound by their context.

“My friends and I walked many hours to take the bus to come [to a Next Generation program] and we were expectant about this event,” said a 16-year-old resident of Curuzu de Hierro in San Pedro, Paraguay. “But now I can say that I have with me the most important person — now I have God in my heart. In my baggage, I have a new Bible that I received. I’m not afraid, even though I should be because my job is [drug]-related. I need to look for any other job that does please God. I’m new in this way, but I’m sure my current job is not pleasing [to] God.”

The Next Generation program is reaching 50,000 urban youth, ages 15 to 29, with the transformative message of the Bible and mobilizing them to take the gospel to their peers. Partnering with 130 volunteers from local evangelical churches, Christian organizations and the Catholic Church, SBP is updating a database of Christian youth who live in the target areas to help conduct the youth festivals in three cities featuring popular Paraguayan Christian artists, testimonies and the preaching of God’s Word. SBP also distributes portions at the festivals and an additional 2,500 New Testaments in Spanish and Guarana­, the official languages of Paraguay.

Church volunteers are providing ongoing youth discipleship. Youth who commit to becoming missionaries receive additional leadership and discipleship training by SBP and will participate in SBP programs, such as medical brigades, Bible Day and other distribution programs. They may also get involved in outreach activities at local churches.

SBP has distributed more than 50,000 Scripture Portions, 3,000 youth Bibles and 5,000 New Testaments to young people since the Next Generation program began in 2007. As a result, approximately 5,000 youth have attended Bible studies, 500 were baptized and joined local churches, and 100 made a commitment to become missionaries in their country. SBP also sponsors many youth activities such as concerts, prayer meetings and youth clubs.

Pedro Yambay, a 19-year pastor of Asuncian-based Iglesia Cristiana Evangelica del Centro (Christian Evangelical Church of the Center), has known SBP for 25 years and seen the good results of their work.

“[The] low cost of Bibles has let them develop ministry among the poorest, and [conduct] ministry in remote areas with their boat,” he said. “The impact in their work has been highly positive, considering that many people have known about the gospel and many of them have decided to follow Jesus.”