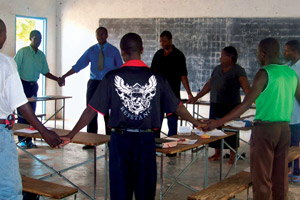 Members of the Chikunda translation team in prayer. The New Testament was released in 2009 and the whole Bible is slated to be finished by 2015. About 145,000 people speak Chikunda in Zimbabwe. (Photo courtesy of the Bible Society of Zimbabwe.)

“People are really turning to God,” said Pastor Ikabodi Chinayati, the new General Secretary of the Bible Society of Zimbabwe. With an inflation rate of an incomprehensible 231 million percent and a chronic shortage of cash and basic necessities, Zimbabwe is in a deep economic crisis that is affecting every aspect of life for ordinary Zimbabweans.

A cholera epidemic adds to the chaos into which this formerly prosperous country has descended. Even so, Mr. Chinayati's most pressing concern upon taking office was securing the release of 40,000 Bibles and Scripture Portions that were held for more than a year in a clearing house. The Bible Society had been unable to pay the release fee until one local businessmen stepped in to cover all costs and release these Bibles. Mr. Chinayati is asking for prayer for positive political, social, economic and spiritual change.

End to End Program Engages New Believers in the Scriptures

I was really happy to be given my own Bible.”

Healing and hope through Scripture in a Kenyan orphanage