Celebrating the anniversary of the Fulton Street Revival 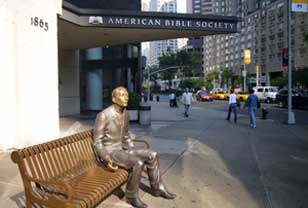 A tribute to Jeremiah Lanphier

In 1857 a New Yorker of Dutch descent, Jeremiah Lanphier, began lunchtime prayer meetings in lower Manhattan. Those meetings sparked a spiritual fire that brought 1 million people to faith during the 18 months of its heyday. On the weekend of September 21 to 23, 2007, some 1,100 people gathered in New York City to celebrate and pray at the 150th anniversary of the incredible Fulton Street Revival.

At the opening dinner, a statue of a seated Jeremiah Lanphier was unveiled. Sculptor Lincoln Fox explained that the empty place on the park bench is meant to be taken by any passerby. That person will sense “his pulse quicken as he feels [Jeremiah's] spirit.” For three months the sculpture will be in front of Bible House on Broadway, before traveling to other New York City locations.

Coffee or the Bible? Americans Respond in New Survey

A Bible for heroes!