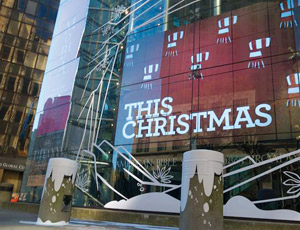 During the Christmas season, residents and visitors to New York City interacted with God's Word through the media wall outside of ABS headquarters.” Photo courtesy of BILLY.

From Nov. 19 to Jan. 7, visitors passing by Bible House, ABS's headquarters in New York City, could join a Christmas experience made possible with new Kinect technology. As guests walked outside the building, they could pick up, shake and open virtual gifts on an interactive screen.

When visitors opened the gifts, they received a message related to Christmas, including “God is with us,” and “Bring good news of great joy.”

The Christmas Kinect experience is part of American Bible Society's Advocacy initiative, which brings the life-changing message of the Bible to popular culture.

To see Christmas Kinect in action, check out this video at ABS.us/kinectgifts.

was given after the institute evaluated feedback from ABS employees.

The designation of Best Christian Workplace is awarded based on performance and best practices in key areas, including workplace culture and employee dedication to the organization's mission.

The award was made public at ABS headquarters in New York City in December 2012.

Inspiring Christian Leaders in the City

American Bible Society and The New York City Leadership Center (NYCLC) co-hosted Movement Day 2012, the third annual gathering of Christian leaders that focuses on spreading the Gospel to cities around the world. More than 1,400 leaders from 362 cities, 39 U.S. states and 8 nations attended the New York City event held in September.

Attendees were challenged to participate in Now is the Time: Acts, an interactive, 30-day Scripture journey being created by ABS in collaboration with The NYCLC and other strategic partners. The program, based on the book of Acts, will launch in May 2013.

the Word™, an ABS initiative that helps leaders and churches engage with Scripture.

“ABS is playing a pivotal role in championing and equipping the Bible cause, and this was recognized by the ministry leaders in attendance,” explains ABS Executive Vice President Bob Briggs.

For information about the upcoming 2013 event, go to MovementDay.com

Rev. Fr. Patrick J. Conroy, a Jesuit priest and the 60th Chaplain of the U.S. House of Representatives, addressed American Bible Society staff in October of 2012. ABS Board Member Sister Joan Curtin described Father Conroy as having “an awesome responsibility of spiritual guidance to

our elected officials in Washington.”

As ABS looks ahead to its Bicentennial in 2016, it continues to collaborate with key people to highlight the importance of the Bible to our culture of freedom. To do this, ABS actively seeks to listen to leaders and influencers in our nation's Capitol to learn their needs and serve them.

The resources, including a Scripture Portion called The Lord is Near to the Broken-Hearted, were designed specifically for people experiencing

life challenges and trauma. Staff at the church distributed the resources to members of the local community.

American Bible Society is launching a Global Prayer Initiative. Through an online, interactive map, participants can pray together for every country in the world every day. Join us in praying that the Bible will transform lives around the world and that the message of salvation in Jesus Christ will reach far and wide to those who are lost and lonely.

Sign up for this global initiative as an individual or get your church or small group involved and pray as a team.