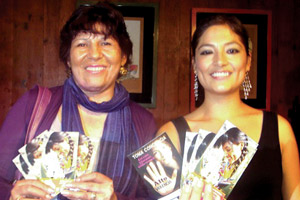 Showing support for the ‘Stop the Violence' campaign are Elizabeth Alanya (left), who was burned with hot water by her spouse, and Peruvian actress and singer Magaly Solier. (Photo by Sociedad Biblica Peruana.)

This is a too common response in Latin America to victims struggling with entrenched domestic abuse. Sadly, prayer, fasting and acceptance are looked upon as the only antidotes for millions of women in Bolivia, Chile, Ecuador, Peru, Nicaragua, Panama and Venezuela.

Up to 50 percent are battered physically, psychologically and emotionally by their husbands — some so viciously that they die. Of the more than 900 women murdered in Chile from 1990 to 2007, the majority were victims of domestic violence.

This problem is rooted in one aspect of Latin America's culture: machismo or male superiority, which turns a blind eye to violence as an assertion of masculinity.

Exacerbating the problem is the “hands-off” philosophy toward domestic abuse. The community and authorities largely consider violence a private matter. And despite more stringent laws against it, many authorities feel sympathy for the abuser and avoid prosecution.

Much to a woman's detriment, biblical principles also are lost. Fanny Cossio, general secretary of the Bolivian Bible Society, says churches can unwittingly reinforce abuse when they preach that it's the duty of women to submit to their husbands “in everything and in all circumstances.”

Biblical forgiveness is often misunderstood in this context. When a woman suffers violence at the hands of her husband, she is counseled to move on and make a new start with him. Women are counseled to forgive — as Christ forgave. But, more often than not, the man has had no counseling or remorse and the abuse continues.

The Peruvian Bible Society (PBS), in concert with American Bible Society, is addressing this through its “Stop the Violence” campaign. By offering Bible-based prevention and sensitization to various sectors of society and the Church, cultural norms are slowly changing. Women and children are equipped with information on how to denounce abuse, and the Church is offering support to victims based on biblical principles that detect abuse, report it and hold abusers accountable.

Now in the last of a three-year campaign, PBS has partnered with Christian and other nongovernmental organizations to spread the message that domestic violence is not acceptable. To date, the PBS has reached more than 9,000 people who are actively involved promoting gender equality and renewing commitment to restored families.

But men, too, are learning the values of love and respect for their families. “I commit to treating my spouse and my children better, respecting and loving them,” says Enrique Perez Giorfino, who attended a “Stop the Violence” training workshop. “I am going to . . . sensitize my community and family environment to not allow any acts of family violence.”

To learn more about what God’s Word says about domestic violence, visit ABSRecord.com/domesticviolence

Representatives of different churches are united through Taizé prayer. Pictured here is Slovenia's...