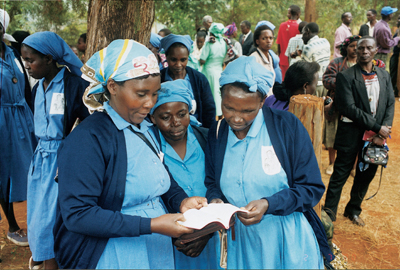 Marsabit, an arid district of Kenya, is home to 90,000 Borana, an ethnic and linguistic minority. Nomadic and facing a lack of services and a harsh climate, the Borana face chronic food shortages and live below the poverty line.

Although the Bible was translated into the Borana language in 1995, several factors including inadequate resources, insecurity in Marsabit, poor communication infrastructure and the nomadic lifestyle have hindered efforts to make God's Word in their language readily accessible.

Through a recent project, the Bible Society of Kenya (BSK) is making Scripture available to 12,525 Borana people in their heart language for the first time as 2,500 Borana receive free Bibles and 10,000 receive Scripture Portions focused on conflict resolution and peace.

One of the challenges facing BSK is the problem of illiteracy. According to the Kenya National Bureau of Statistics, the 2006 national adult literacy rate in Kenya was 61.5 percent. However, the northeastern provinces within the project area have the country's lowest literacy rates at 9 percent. To help address the low literacy rates of the Borana, BSK has approached the Kenyan government to coordinate work with its adult literacy program.

A second challenge lies in the fact that Marsabit is a Muslim stronghold, with only 10 percent of Borana practicing Christianity.

“We ended our Bible literacy work with the Borana people 10 years ago due to lack of funding,” said Mundara Muturi, general secretary of Bible Translation and Literacy (BTL) in Nairobi, Kenya. “The need for Scripture remains great and Marsabit district is witnessing an onslaught of evangelism by the Islamic faith.”

As BSK works with 20 churches from Marsabit Pastors Fellowship and 10 others, a grassroots movement of Bible promotion is being facilitated to encourage Borana to participate in ongoing Bible studies and literacy programs, in partnership with Scripture Union, which works to introduce children and young people to God’s Word through a variety of programs.

“BSK is an invaluable resource in making God’s Word accessible and affordable to minority tribes in Kenya,” said Gertrude Obwoge, general secretary of Scripture Union, Nairobi, Kenya. “We have an established beneficial collaboration with BSK working with the pastoral Masai people to promote daily Bible reading, primarily among children in schools by targeting schools, teachers, parents and local leaders.” 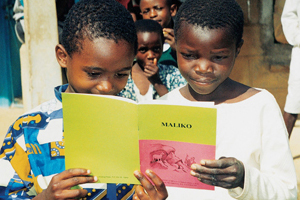 Four national holidays in the Marsabit district draw traditionalists and nominal believers together for celebrations annually. On these days, BSK distributes 10,000 Scripture Portions to those who would otherwise never purchase Scripture.

“I have been a Muslim all my life but I have never experienced so much love as [what] I have heard when listening to the Bible,” said Alu Guyo, a young Borana who participated in a Faith Comes By Hearing® (FCBH) program launched in Kenya in 2007.

As a result of BSK's and FCBH’s previous work, 5,000 members of the Masai tribe gained access to Scripture. Pastors reported being more open and better equipped to discuss culturally sensitive issues such as marriage and gender relationships. Through its two main offices — headquarters in Nairobi and an office in Western Kenya — BSK has established distribution channels in schools, churches and marginalized groups. Every year, 300,731 people receive Bibles, with thousands more receiving Portions.

“There is great potential for church growth in Marsabit and many denominations working here are using different ways to bring God's Word to the nonbelievers and the nominal Muslims,” said Rev. William Waqo of Marsabit Pentecostal Church. “The greatest tool remains the ability to receive Scripture in a peoples language.”

100 Million Seeds of Peace and Hope

Rudi Zimmer, general secretary of the SBB, holds up the 100 millionth Bible. (Photo courtesy of...