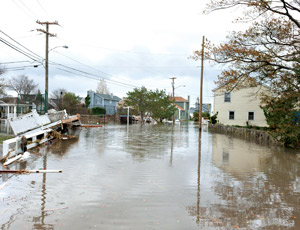 Hurricane Sandy left a path of destruction as it moved along the East Coast.

In the hours before Hurricane Sandy unleashed a torrent of wind and water on the East Coast, American Bible Society and partner organization Operation Compassion mobilized to provide 225,000 Scripture Portions, food and water to victims within 72 hours of the storm. In the days and weeks following the storm, ABS continued to network with churches to meet the needs of their communities.

Arthur Satterwhite remembers the moment he saw the older couple shuffle into the church-turned-hurricane relief center in Manahawkin, N.J. It was an afternoon in early November, and Satterwhite, ABS's manager of Uncover Operations, was working with the church to provide much needed Scripture resources to victims of the storm.

The woman was sorting through piles of donated supplies to find a pair of work gloves for her husband. They had lost everything except one sock drawer when the water surged into their home, and they had no money to hire someone to make repairs.

The work gloves, the woman told Satterwhite, would help her husband as he began to restore the home where they had raised their children.

When Satterwhite asked if he could pray with them, they nodded yes. As Satterwhite began to pray the words of Scripture, they were in tears.

“In the midst of horrible circumstances, God's Word can come through exactly how and where we need it,” Satterwhite says.

In the aftermath of Hurricane Sandy, American Bible Society provided the hope of Scripture to hundreds of thousands of people up and down the East Coast.

Before Sandy hit the shore, Delores Burnett, manager of ABS's Embodying Hope Ministries, made sure that the Scripture Portions God is Our Shelter and Strength™, designed for distribution in crisis situations, were on their way to affected areas.

“I was so upset that I lost my Bible,” one recipient told Burnett, “but this Portion is filled with [God's] promises and reminds me that God will make a way.”

But Burnett emphasizes that a long-term approach to disaster situations is just as important as a fast response. That's why it's crucial to work through established,

local churches. Even after other disaster relief agencies scale back their work, ABS can continue to provide support through church networks in the community.

In the weeks following Hurricane Sandy, Satterwhite spoke with church leaders in New Jersey to learn the needs of the communities. Their response? Bibles.

Satterwhite says that he talked to one pastor who was operating a distribution center out of his church in Manahawkin, N.J. The pastor explained that people had donated food, clothing, shelter and building supplies, but the church had quickly run out of its supply of Bibles.

“[Victims of Hurricane Sandy] lost everything, including their Bibles,” Satterwhite says. “The church staff and volunteers didn't know how they would get more or where they would come from. There was no budget for them.”

So Satterwhite mobilized ABS to send 2,500 copies of God is Our Shelter and Strength. ABS also provided 250 full Bibles for the pastoral staff and volunteers to distribute to victims of the storm.

And the requests for Bibles kept rolling in. Satterwhite arranged for supplies of full Bibles, New Testaments and Scripture Portions to go out to relief centers run from churches in Tuckerton, N.J., and Sayreville, N.J.

“The work of ABS is critical, especially in times like these,” Satterwhite says. “The local church is working to meet the needs of the entire community, but they rely on organizations like ABS to come to the table with resources.”

Comfort in the Storm

And Satterwhite personally knows the importance of the Bible. On the Saturday before the storm, he had to evacuate from his own home in Long Branch, N.J.

Hours later Sandy would reduce the boardwalk outside his apartment complex to a pile of strewn rubble, transform surrounding neighborhoods into ghost towns and cloak the area in darkness. Just one concrete bench from the Long Branch boardwalk remained after the storm. But despite the storm's strength, Satterwhite knows that at the end of the day, God's Word is stronger than Sandy.

A working model of the Gutenberg Press at Passages exhibition. (Photo by Judy G. Rolfe....

During the Christmas season, residents and visitors to New York City interacted with God'...