The Arab Spring a Year Later

Perspectives from the Bible Societies 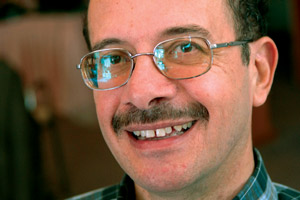 Before the Arab Spring of 2011, Bible Societies in the Middle East faced many challenges, but they knew the limits of religious and political freedom under which they worked. Today, they are seizing new opportunities to share God's Word, despite a shifting landscape in which boundaries are unclear and the future uncertain.

Egypt
Egypt is one of the most drastically changed countries, said Ramez Atallah of the Bible Society of Egypt. “Everything seems to be moving along by inertia, but we don't know how it's working or who's in charge.” Recent elections gave Islamist political parties large majorities in the parliament and senate, creating much anxiety among moderate Muslims and Christians. Prices are rising along with unemployment, while tourism, a primary source of income and jobs, has plummeted. Security has improved from 2011, but protests and violence continue to disrupt public life. 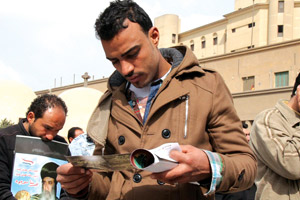 A man among the crowd of mourners at the funeral on March 20 of Pope Shenouda III, reading a Scripture leaflet printed by the Bible Society of Egypt. One million copies were distributed across the country within a week of his funeral.

March 17, 2012, marked the passing of Pope Shenouda III, Patriarch of the Egyptian Orthodox Church and spiritual leader of Egypt's Coptic Christians — which make up half of the Arabic-speaking Christians in the world. “Egyptian Christians feel his loss acutely,” said Atallah, “as his absence at a time when Egypt is moving toward the Islamization of our society makes Christians feel much more vulnerable without a strong spokesman.” Christians are not alone in this vulnerability, Atallah emphasized: moderate Muslims, particularly women, may pay a high cost under an Islamist government.

In this time of anxiety and uncertainty, the Bible Society of Egypt has embraced opportunities to give the Bible a voice in the public square. It commemorated Pope Shenouda's life with a million copies of a pamphlet — its largest print run ever — which included Scripture passages that had guided the Pope's life. This pamphlet was distributed around the country and 31,000 were given out at the Pope's funeral, and on the following day as military rulers, presidential candidates and top national figures came to the Coptic Cathedral to offer official condolences, “it was the only item offered for distribution,” Atallah said.

The Bible Society of Egypt has also purchased advertising space on television, in newspapers and on billboards to proclaim Bible messages with unprecedented freedom, and is distributing more titles than ever before. It continues to hold children's festivals featuring Kingo the Lion, a popular children's character (created by American Bible Society) who communicates Bible messages through drama and music. The Bible Society's presence at the 2012 book fair in Cairo (which had been canceled in 2011 due to unrest) enabled ministries to purchase Bible materials in bulk and gave opportunity for seekers to buy Bibles at low cost. 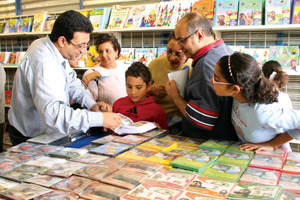 People show interest in products at the Bible Society of Egypt's stall at the Cairo Bookfair.

In an update about this year's book fair, Atallah wrote, “One young lady purchased a New Testament and the staff suggested that she discreetly put it out of view because of the people outside who would harass her and insist that she return the item. She boldly replied, ‘Give me some more!' and purchased several Bibles instead of one. As she went out, those waiting began to badger her. She yelled at them loudly, saying they had no right to tell her what to do. Another lady, who was older, was given the same treatment as she left our booth. She responded in quiet, motherly tones, giving them the same message, however, refusing to give up her rights.”

Syria
As violence and repression continue in Syria, the Bible Societies in the region have been there to support refugees fleeing into Jordan and Lebanon. Bible Lands Team Coordinator Labib Madanat said the Bible Society is actively helping with humanitarian aid and Scriptures (for those who ask) and prayers for those who accept. One of the workers helping Syrian refugees told Madanat, “I spend time with people listening to their stories. It makes me feel physically sick when I hear what atrocities they faced, and I see the scars on their bodies. If it was not for Jesus in me, I would be filled with hate against those who cause fellow humans such suffering. But then I respond according to Jesus to bring healing and hope to the oppressed instead of me becoming filled with hate against the oppressors.”

Gulf Region
Meanwhile, the Bible Society in the Gulf (BSG) continues its service to Kuwait, Bahrain, Oman, United Arab Emirates, Qatar and Yemen. It hosted a forum on “Christianity and Authority” that brought together leaders of the major Arabic-speaking Christian churches to discuss a Christian response to the revolutions rocking the region. Participants studied the Scriptures together and concluded that God has put authorities in place, but Christians may peacefully protest a government using its authority in an unjust way. “This topic is a very daring, sensitive and timely one, and one that only the BSG could pull off,” said a leader of the Armenian Orthodox Church.

The Bible Society in the Gulf also ministers to migrant workers, a group often forgotten in the Mideast upheaval. These expatriates labor in back breaking construction and industrial jobs and often feel alienated and discriminated against, said BSG General Secretary Hrayr Jebejian. The Bible Society helps local churches minister to these workers. It operates Bible resource centers in places such as “Church City,” an area near Doha, the capital of Qatar, allocated by the government for recognized Christian denominations to build their churches. The Christian community of Church City is now 100,000 and growing.

In the midst of so much change, the approach of the Bible Society of Egypt typifies the response of Bible Societies throughout the Middle East: It seeks to use this window of opportunity to advance the Bible message without jeopardizing the long-term safety and effectiveness of its work. Atallah said, “The biggest thing to pray for [is that] young people who dared to challenge autocratic oppression will see political and social freedom realized.”

Whether the future of the Middle East will be one of theocratic government or true religious freedom, Bible Societies are working harder than ever to bring the Bible to a region turned upside down.

Help and Hope for Haiti